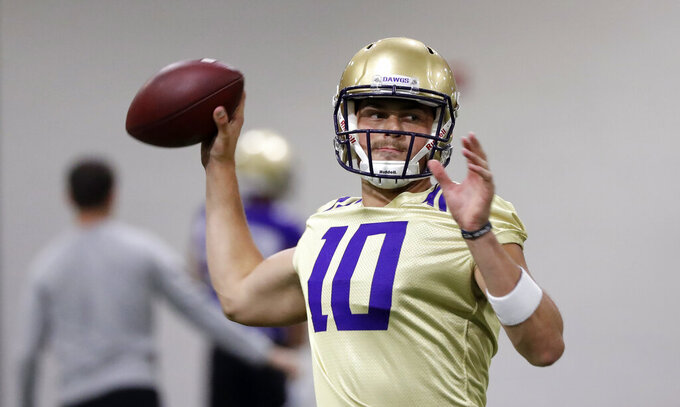 FILE - In this Aug. 5, 2019, file photo, Washington quarterback Jacob Eason readies a throw during an NCAA football practice in Seattle. In his tenure at Washington, Chris Petersen has faced situations where the Huskies lose a significant chunk of talent to the next level, only to replenish and continue what’s been an upward trend during his first five seasons in charge. This season will test whether the Huskies can simply continue to reloadThey could have Georgia transfer Jacob Eason _ once the top recruit in the country coming out of high school _ under center at quarterback. (AP Photo/Elaine Thompson, File)

SEATTLE (AP) — No. 13 Washington has named Georgia transfer Jacob Eason its starting quarterback for the season opener against Eastern Washington.

Eason was expected to land the starting job after transferring to the Huskies but was in an extended competition with sophomore Jake Haener throughout spring practice and into fall camp. Coach Chris Petersen said Haener will also play in the opener.

He was injured in the first quarter of the season opener the following year and never regained the starting job after Jake Fromm took over and led the Bulldogs to the national championship game. Eason transferred and sat out last season under NCAA transfer rules.

Eason's first start at Washington will be his first game action since Oct. 7, 2017, against Vanderbilt.