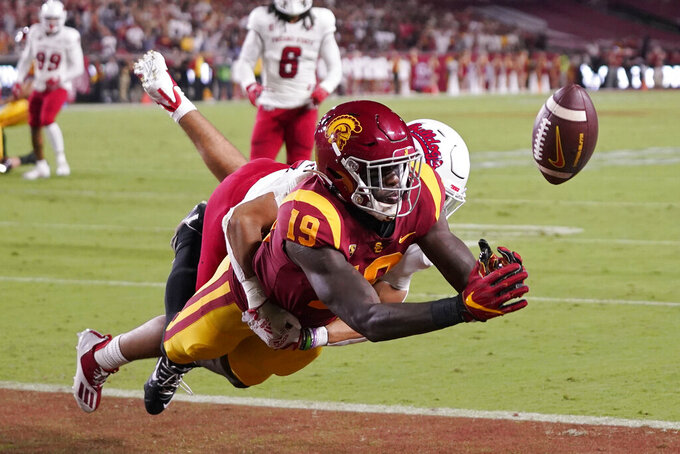 Southern California tight end Malcolm Epps, left, can't get to a pass in the end zone as Fresno State defensive back Evan Williams defends during the first half of an NCAA college football game Saturday, Sept. 17, 2022, in Los Angeles. (AP Photo/Mark J. Terrill)

While coach Lincoln Riley has USC back on a winning path, Oregon State presents perhaps the biggest challenge so far of his first season with the Trojans.

The No. 7 Trojans and the Beavers are undefeated heading into Saturday's game at Reser Stadium.

In years past, Oregon State might not be a game to circle on the schedule, but the Trojans have reasons to be leery of the Beavers.

Oregon State went to the Coliseum last year and beat the Trojans 45-27. It was the Beavers' first victory at USC in more than 60 years.

Granted, USC was having a down year, one of the reasons Riley is now coach, but for the Beavers it was a big step in a steady improvement project under coach Jonathan Smith.

“It’s where we wanted to be,” Smith said. “You start the season, you’ve got a nonconference schedule, and I think we had some good play there. Not a complete game all three games, but found ways to win. That’s what you wanted. But the real season starts now. First of nine conference games that obviously we want to have the same result.”

Riley said the Beavers present challenges offensively because they have ways of making the most of their roster. One example is two-way player Jack Colletto, who plays at linebacker, running back and wildcat quarterback.

While USC is ranked seventh nationally in scoring offense with an average of 50.7 points a game, Oregon State is not far behind in 13th, averaging 45.7 points.

USC has built a high-powered offense by tapping into the transfer portal. The Trojans have 33 transfers from four-year universities on their roster.

Among them is quarterback Caleb Williams, a transfer from Oklahoma, who has thrown for 874 yards and eight touchdowns this season. He's completed 75% of his passes with no interceptions.

Another standout plucked from the portal is receiver Jordan Addison, the 2021 Biletnikoff winner who transferred from Pitt. He leads the Trojans — and shares the Pac-12 lead — with five touchdown catches this season. In all, he has 18 receptions for 295 yards.

“Each week you’re going to have challenges,” Smith said. “They’ve got some good players and uniqueness, and credit to them and those guys, but we’ve got to put a plan together and play really hard, disciplined with our eyes, get around the passer in a way that disrupts him.”

USC defensive lineman Tuli Tuipulotu went back and looked at the film of last season's Oregon State victory over the Trojans.

“It was tough to watch,” Tuipulotu said.

But the Trojans have the same mindset going into Saturday's game that they had against Stanford, which also beat them last year. USC downed the Cardinal 41-28 this season.

“Same thing with Stanford. I know that's in the past, but man, that game was like a revenge. We need our get-back so we're going to continue to work, to prepare for this weekend. Get ready for Saturday,” Tuipulotu said.

Oregon State will be without tight end Luke Musgrave, who led the team with 169 receiving yards through the first two games, because of an unspecified injury.

Musgrave was injured on the Beavers' final series against Fresno State. He also missed last week's game against Montana State. Smith did not have a timetable for his return.

Oregon State is also missing running back Trey Lowe, who has missed the last two games.

To prepare for the game at Reser Stadium, Oregon State has been playing the USC fight song on repeat during practice this week.

Not to be outdone, USC has played revving chainsaw noises at its practices.