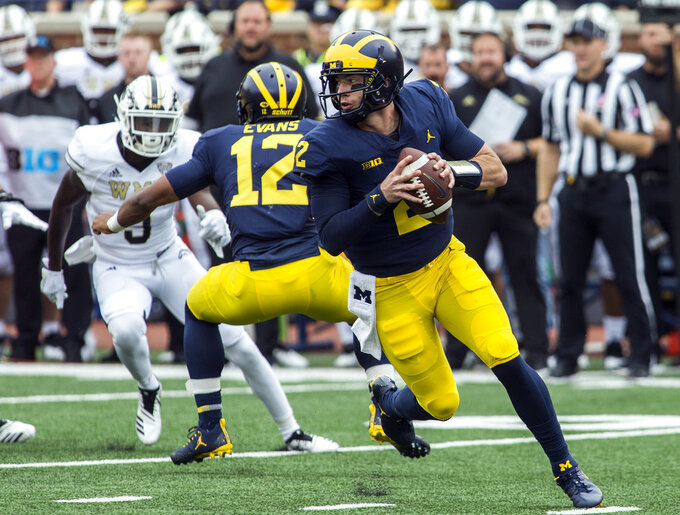 Michigan quarterback Shea Patterson (2) rolls out of the pocket looking to throw a pass in the first quarter of an NCAA college football game against Western Michigan in Ann Arbor, Mich., Saturday, Sept. 8, 2018. (AP Photo/Tony Ding) 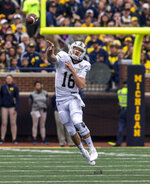 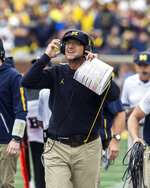 ANN ARBOR, Mich. (AP) — Shea Patterson used to hear his father tell him bedtime stories as a kid and the tales always included him playing quarterback at Michigan Stadium.

He just lived the dream.

Patterson threw three touchdown passes, one in each of the first three quarters, in his Big House debut to help No. 21 Michigan bounce back with a 49-3 win over Western Michigan on Saturday.

The heralded transfer from Mississippi grew up in Ohio, rooting for the Wolverines and attending some of their home games, before his family moved to Texas.

Patterson said it really hit him when the team bus rolled past a familiar tailgating scene surrounding the stadium before the game and even more when he walked down a long tunnel and ran onto the field.

"It was kind of emotional," he acknowledged.

Coach Jim Harbaugh, who recruited Patterson to play a position that was a weakness last season, stayed behind Patterson to watch him leap to touch the banner over the maize block M at midfield.

"That's awesome when it means something to somebody," Harbaugh said.

Patterson was 12 of 17 for 125 yards. He connected for two scores to wide receivers after the position group accounted for a total of just three touchdowns last season, none of which were scored after the second game for the Wolverines.

"Shea played well again," Harbaugh said. "A couple of the plays he made out of the pocket on the dead run, getting out of trouble, were big-time plays. He was really accurate again, playing cool, and making the tight window throws ."

Karan Higdon ran 140 of his 156 yards and a touchdown in the first quarter to help Michigan build a lead 21-0.

The Wolverines (1-1) desperately needed the confidence-boosting victory after losing four straight, dating to last season, for their longest losing streak since 2009. They lost by seven last week at Notre Dame to deflate some of hype about its chances this season.

Higdon, though, said it's too early to celebrate.

"We have to take this game with a grain of salt," he said.

The Broncos (0-2) were unable to rally from a big deficit as they did before falling short in last week's loss against Syracuse.

"The defense needed us to make a play to get a little bit of momentum," Western Michigan coach Tim Lester said. "And offensively, we didn't make that play to give them a little bit of a breather."

Michigan dominated in each phase of the game.

Higdon had a 67-yard TD run in the first quarter and Chris Evans scored his first of two TDs on a 27-yard run to put the Wolverines up 21-0.

Noah Furbush intercepted a pass in the first quarter and Khaleke Hudson blocked a punt in the second quarter, setting up TDs as Michigan went ahead 35-0 at halftime.

The Broncos avoided getting shut out when Josh Grant made a 35-yard field goal with 2:34 left.

Western Michigan: The Broncos can't afford to keep digging huge holes in the first half. They trailed Syracuse last week at home 34-7 before scoring 28 points in the third quarter to pull within a TD and ending with a 55-42 setback.

"The biggest thing that we need to continue to work on is how we start," Lester said.

Michigan: The Wolverines' much-maligned offensive line was able to open holes for the running game and protect Patterson, allowing him to comfortable throw from the pocket or on the move.

"I don't think I've ever seen holes open up that wide," Patterson said.

Michigan might move up a little after routing an overmatched team as expected if teams just ahead of them in the poll lose.

Brenda Tracy , a sexual assault survivor and activist , was an honorary captain after she spoke to the team about setting the expectation for men to treat women the right way.

Harbaugh invited Tracy to come back and join captains for the coin toss , honoring her as he has previously with people such as Michael Jordan.

"We all learned so much from Brenda," Harbaugh said. "I did personally and I know all our guys did. She's amazing."