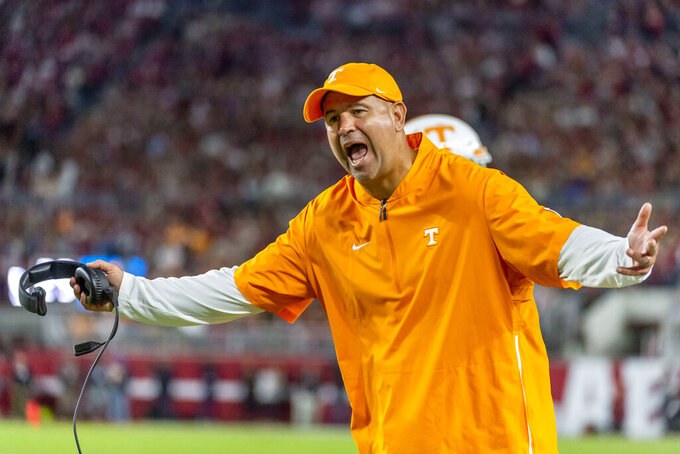 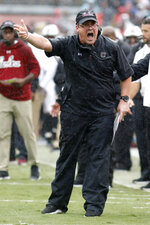 COLUMBIA, S.C. (AP) — South Carolina coach Will Muschamp has few peers in the SEC who can equal his success against Tennessee.

Muschamp is a perfect 7-0 against the Vols as a head coach.

He's won big (37-20 with Florida in 2012) and won close (last year's 27-24 win at South Carolina). He's needed late kicks and last-second stops. And if he knew why he has been able to go unbeaten against Tennessee, Muschamp would've bottled up the reasons and used them throughout his career.

He said there is no common thread for his winning run over the Vols.

"Every week's a season," Muschamp said. "There's a new season this week."

Muschamp's had plenty of successful seasons against the Vols.

He coached at Florida for four seasons from 2011 to 2014, then became the Gamecocks coach starting in 2016 and is in his fourth season at South Carolina. Muschamp's career mark overall is 53-42 and 31-30 against the SEC.

Tennessee coach Jeremy Pruitt, in his second season, doesn't believe there is a secret to Muschamp's success — he says the Gamecock's coach just puts a focused, hard-to-penetrate defense on the field.

"You can count on coach Muschamp's defense to be tough and be sound," he said.

Another thing to count on with Muschamp at the helm is for the Gamecocks to pull out close games against Tennessee.

In 2016, the Vols were ranked 18th and looking once again to break through in the SEC East. But Muschamp's Gamecocks, behind freshman in quarterback Jake Bentley and tailback Rico Dowdle, opened a 10-point lead and held on to win 24-21.

The next year, the Vols led 9-3 in the second half and looked on the way to ending Muschamp's run of success. But South Carolina rallied behind Bentley and put up a goal-line stand in the final seconds after Tennessee had driven to the Gamecocks 2 in the 15-9 win.

It was more of the same last year as Tennessee took a 21-9 lead in the third quarter before falling to South Carolina 27-24. The Vols were held scoreless the final 17 minutes and Gamecocks defensive end D.J. Wonnum sealed the win with a fourth-down sack of Tennessee passer Jarrett Guarantano with little more than a minute left.

Wonnum isn't sure why the Gamecocks have been able to overcome the odds against Tennessee.

"I can't really tell you," Wonnum said. "But I know we come out and play hard and the work we put in is the reason why that happens."

Both South Carolina and Tennessee are looking for a win to jump-start the final stretch of the season.

The Gamecocks led No. 7 Florida 20-17 into the fourth quarter last week before surrendering three of Kyle Trask's four touchdown passes in the final period of the Gators' 38-27 victory.

The Vols trailed No. 1 Alabama 28-13 and was driving for a score when Guarantano fumbled on the Crimson Tide 1 and Trevon Diggs went 100 yards for the touchdown in the 35-13 victory.

Tennessee's Pruitt believes South Carolina will come into the game looking to build off its up-turn the past few weeks, which included ending a five-game losing streak to Kentucky last month and beating then-third-ranked Georgia in double overtime , 20-17, two weeks ago.

"His guys always play hard, sound, tackle well," Pruitt said of Muschamp. "They're going to get after you. That's the way he was as a player and they're going to take on his personality."

Particularly when it's come to facing Tennessee.