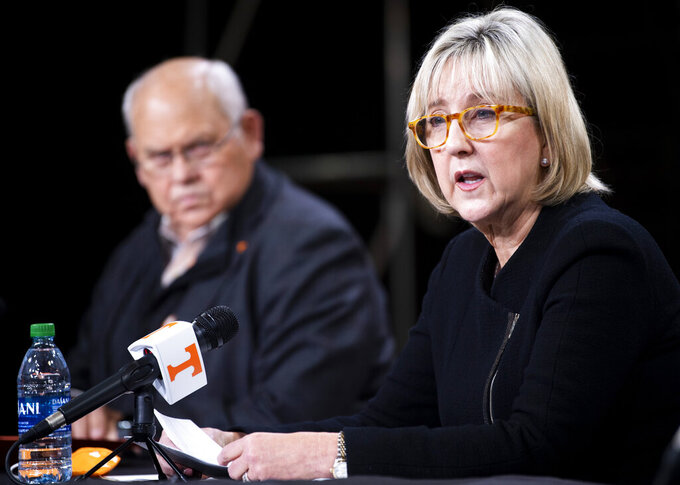 Chancellor Donde Plowman announced the hiring Thursday, noting Tennessee handled this search with urgency. She said officials had enough interest in the position to be able to move quickly.

“Danny White is an innovative leader in college athletics with a strong track record in recruiting and developing leaders," Plowman said in the release. “He brings the combination of winning attitude, competitive drive, and dedication to integrity and academics that we are looking for.”

White will be Tennessee's fourth different athletic director since Dave Hart took over in September 2011, and his first job will be hiring a new football coach with the Volunteers in the midst of an NCAA investigation into recruiting violations that cost Pruitt his job.

“I am thrilled to be headed to Knoxville and to a university with a great competitive tradition and a spirited and devoted fan base," White said in a statement. “Volunteer fans have an expectation to win, and my first task will be taking on the search for a new head football coach.”

White signed a five-year contract at UCF in March 2020 paying him more than $1 million a year with a $2.5 million buyout if he left for another school before May 11, 2021. It is unclear how the buyout is being handled.

Tennessee will introduce White at a news conference Friday, but when he starts is still being finalized. He will earn $1.8 million a year with an annual pay hike of 5%. He also will be eligible for up to $300,000 annually for team athletic performance, academic performance and operational goals.

UCF hired White in November 2015, and his first job then was hiring a football coach. Scott Frost left for Nebraska after going 13-0 in 2017, then White hired Josh Heupel. The UCF men’s basketball team made the 2019 NCAA Tournament and lost 77-76 to Duke in the second round.

Randy Boyd, president of the University of Tennessee system, said White is a great fit for what Tennessee is building.

“He combines a strong vision for competitive excellence with a deep commitment to winning with integrity," Boyd said. "The greatest decade in UT Athletics begins now.”

White played college basketball at Towson and Notre Dame where he graduated in 2002. He then was director of operations and an assistant coach for a season apiece at Ohio University where he earned master's degrees in business administration and sports administration. He earned a doctorate in higher education at Ole Miss in 2016.

Fulmer was staying on until a new athletic director took over. The details of his final transition had not been finalized as of Wednesday, but Tennessee said it anticipates paying Fulmer $37,500 per month through Dec. 31, 2023, thanks to a two-year extension signed last May.