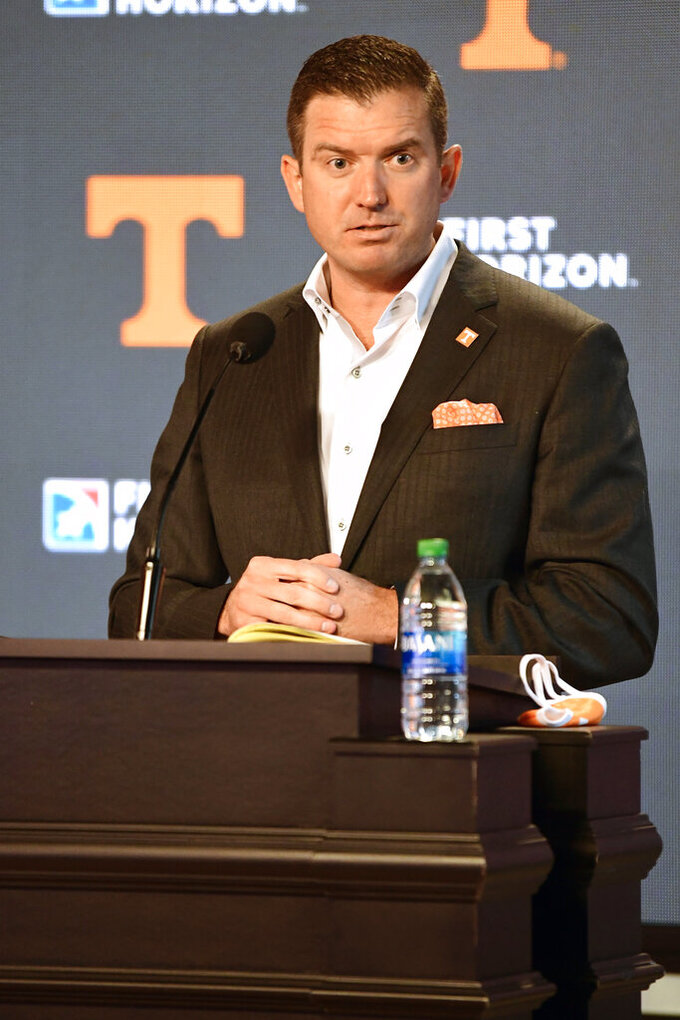 Danny White is embracing the opportunity Tennessee is giving him to rebuild a Power Five program and not even the prospect of potential NCAA punishment deterred him from taking the athletic director job.

“I've never worked at the big brand place until now, and I actually like the fact that the brand needs to be polished a little bit, needs to be elevated back to where it was just not too long ago,” White said at his introductory news conference Friday.

White's first job is hiring a new football coach with the Volunteers in the midst of both an internal and NCAA investigation into recruiting issues that cost coach Jeremy Pruitt, two assistant coaches and seven others their jobs Monday.

Chancellor Donde Plowman did not have an estimate for when Tennessee's own investigation will be completed. White said he has a long-term view for his third different program as athletic director.

Tennessee is paying White a starting salary of $1.8 million a year and an annual pay hike of 5%, twice the $900,000 base pay for retiring AD Phillip Fulmer. White also will be eligible for up to $300,000 annually for team athletic performance, academic performance and operational goals in the five-year deal.

White signed a five-year contract at UCF in March 2020 paying him more than $1 million a year, and Tennessee will pay the $2.5 million buyout for his leaving before May 11, 2021.

He said everyone is a candidate and he will be moving “quickly" to hire a new coach. White planned to meet with up to nine members of the football team and also had a meeting with acting head coach Kevin Steele later Friday.

White cited his own hiring as how quickly he might move, hired just three days after Tennessee announced Pruitt's firing and Fulmer's departure.

Plowman spent Monday night and Tuesday talking with people connected to Tennessee about what to look for in the next athletic director. She said Peyton Manning asked Duke coach David Cutcliffe on advice he could give Plowman and that Cutcliffe recommended someone like Duke's AD Kevin White, Danny White's father.

The Tennessee chancellor interviewed White on Tuesday night via Zoom, then interviewed him again Wednesday with the university system president, Randy Boyd, and the chairman of the Board of Trustees. They flew to Orlando and met with White that night and announced his hiring Thursday.

“It was clear who the top candidate was,” Plowman said. “It was Danny White.”

UCF hired White in November 2015, and his first job then was hiring a football coach. Scott Frost was so successful he left for Nebraska after going 13-0 in 2017, then White hired Josh Heupel. The UCF men’s basketball team made the 2019 NCAA Tournament and lost 77-76 to Duke in the second round.

White also has worked at Mississippi, California State-Fresno and Northern Illinois. His brother, Mike, is head coach of Florida’s men’s basketball team. His brother, Brian, is athletic director at Florida Atlantic, and his sister is assistant athletics director for administration at SMU.

He said Tennessee has to be aggressive to get to where the athletics department belongs.