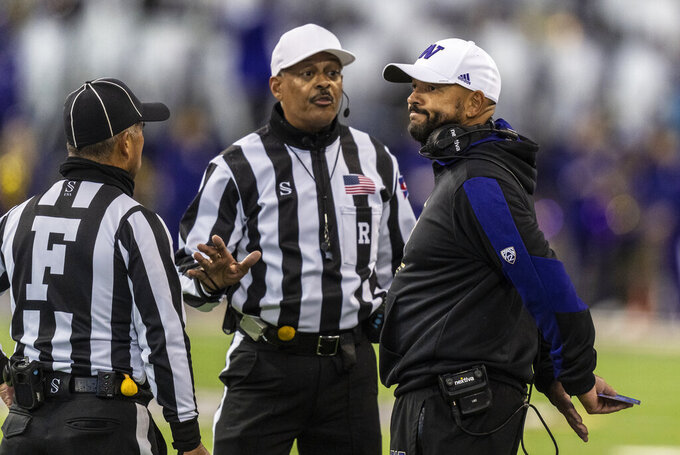 SEATTLE (AP) — Washington coach Jimmy Lake was suspended Monday for one game without pay following a sideline incident during the Huskies' game against Oregon.

Lake is suspended from all team activities for the week and will return to his coaching responsibilities Sunday. Defensive coordinator Bob Gregory will serve as the interim coach for Saturday's game against Arizona State.

Lake appeared to thrust his right arm toward and then shove Ruperake Fuavai during a brief skirmish on the Washington sideline in Saturday's 26-16 loss to Oregon. Fuavai appeared to be exchanging words with Oregon’s Jaylon Redd just before the incident with Lake.

"Our staff has spent the last 24-plus hours reviewing video of the incident, as well as speaking with coach Lake, the involved student-athlete and several other student-athletes and members of the staff, and I have made the decision to suspend Coach Lake for next Saturday’s game against Arizona State,” Washington athletic director Jen Cohen said in a statement.

Cohen added that she does not believe Lake's actions were intentional, but “we can have no tolerance for a coach interacting with a student in the manner coach Lake did.”

“We have high expectations of conduct for our coaches, and we will not shy away from those expectations,” Cohen said.

Lake said after Saturday's game that he did not hit Fuavai and was trying to get him away from Redd before it could become a penalty.

Lake posted an apology to Fuavai, his team and the school's administration on social media late Monday afternoon.

“I fully accept the decision that was made. Our team has a right to expect better than what I displayed on Saturday, and I'm committed to doing just that — being better so our program will reflect all that's good about being a Washington Husky,” Lake said.

The suspension capped arguably the lowest week of Lake's tenure, and the discontent among fans and alumni is rapidly growing. Lake started last week by taking a verbal shot at the academics of Oregon when talking about recruiting. Then came the sideline incident and another lackluster offensive performance as the Huskies lost to the Ducks at home for the seventh time in the past eight meetings.

Gregory, in his eighth season on the Washington staff, said he did not find out about the incident with Lake and Fuavai until he got home after the game and received a text message. Gregory said that Cohen addressed the team about the decision to suspend Lake.

A day before the suspension was announced, Lake fired offensive coordinator John Donovan. The Huskies rank in the bottom third nationally in most offensive categories, including 109th in scoring offense and 112th in total offense.

Wide receivers coach Junior Adams will replace Donovan as Washington's play caller for the rest of the season. Adams indicated he's open to all options stepping into the role, including the idea of a change at quarterback where sophomore Dylan Morris has struggled.

“We’re going through (the) game plan right now, and we’re going to see where we’re at with that,” Adams said. “But Dylan, we’re gonna put him in the best position that he can be in for him to be successful.”

Washington (4-5) must win two of its final three games to become bowl eligible.