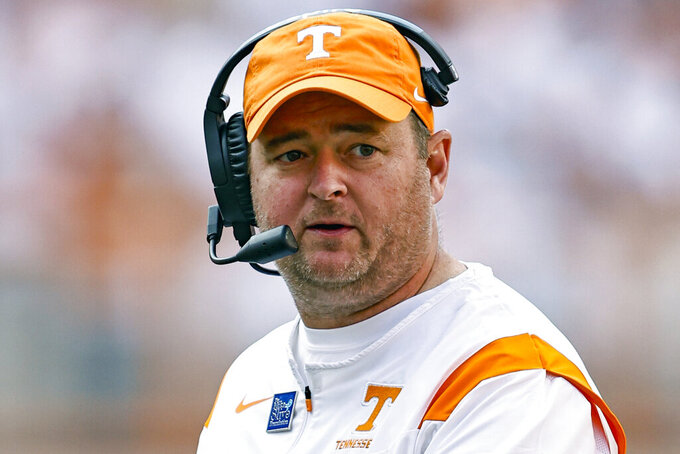 FILE - Tennessee coach Josh Heupel congratulates players after a touchdown during the second half of the team's NCAA college football game against Florida on Saturday, Sept. 24, 2022, in Knoxville, Tenn. Tennessee won 38-33. Heupel was named Coach of the year for the AP All-SEC team announced Monday, Dec. 5, 2022. (AP Photo/Wade Payne, File)

Tennessee quarterback Hendon Hooker is the Southeastern Conference offensive player of the year and Alabama linebacker Will Anderson Jr. was named the top defensive player for the second straight year.

Tennessee coach Josh Heupel was picked as coach of the year by the Associated Press Monday after keeping his team in playoff contention for much of the season. The sixth-ranked Volunteers are 10-2 and face No. 10 Clemson in the Orange Bowl.

Hooker was picked as first-team quarterback and offensive player of the year on all but one ballot, with that nod going to Alabama's Bryce Young in both cases. He suffered a season-ending left knee injury in a loss to South Carolina, finishing with 3,135 yards passing and 27 touchdown passes against just two interceptions.

Anderson was the unanimous pick as defensive player of the year. He has 51 tackles, 10 sacks and 17 tackles for loss along with a pick-six.

The voting was conducted among a panel of 15 sports writers and broadcasters covering the league.