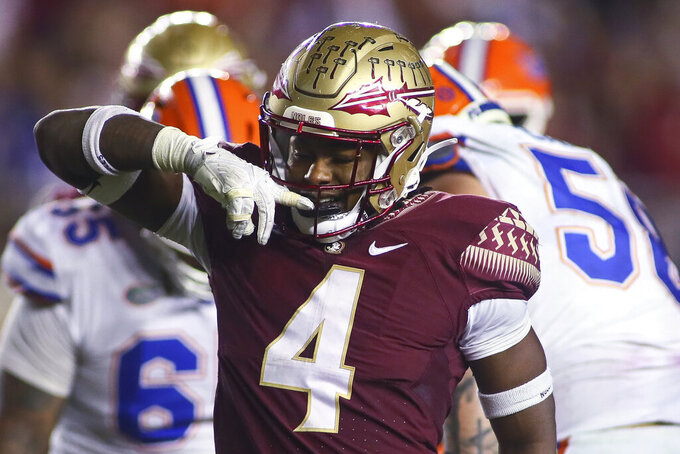 Seems like it was just yesterday that Florida State won a wild game against LSU on the Sunday of Labor weekend. Who could forget it?

Well, 12 weeks later, it appears some AP Top 25 voters have.

The Associated Press college football poll presented by Regions Bank got a remake near the top thanks to four top-10 teams losing this past weekend, but there were some interesting results among teams that have played.

No. 2 Michigan, No. 3 TCU and No. 4 Southern California all moved up one spot behind top-ranked Georgia after Ohio State lost to the Wolverines.

The Buckeyes dropped from No. 2 to fifth.

LSU, Clemson and Oregon were the other top-10 teams to lose.

LSU (9-3) landed at No. 11, falling five spots. That was three places ahead of Florida State (9-3). The surging Seminoles closed the regular-season with five straight victories and LSU stumbled at the finish, losing Saturday night at Texas A&M.

To be fair, Florida State did lose to the toughest team (No. 10 Clemson) on its schedule and LSU beat No. 6 Alabama. And voters do respect the Tide.

Alabama (10-2) remained a spot ahead of a Tennessee team that it lost to in October. The Vols (10-2) have a couple of lopsided losses on their resume at this point, including to South Carolina last week.

Reality Check understand that not all head-to-head results need to be treated the same, but why not let the scoreboard make the call when it's close?

Next: vs. No. 11 LSU at Atlanta in Southeastern Conference championship, Saturday.

Next: vs. Purdue at Indianapolis in Big Ten championship, Saturday.

Reality check: Michigan had three plays of at least 60 yards in its first 11 games, then had four touchdowns of 69 yards or more against Ohio State.

Next: vs. No. 13 Kansas State at Arlington, Texas, in Big 12 championship, Saturday.

Reality check: The Heisman Trophy appears to be USC's Caleb Williams' to lose. And if he does lose it, Frogs QB Max Duggan might be best positioned to take it.

Reality check: Can the Trojans figure out a way to slow Utes TE Dalton Kincaid in the rematch? He had 16 catches for 234 yards in Utah's one-point win in Salt Lake City.

Reality check: The defensive breakdowns against an offense missing its best player against Michigan were stunning. The Buckeyes failing to capitalize fully on good scoring chances was a second-half-of-the season trend.

Reality check: It was going to be near impossible for OLB Will Anderson Jr. to match last season's historic production, but 10 sacks among 17 tackles for loss is a seriously good year.

Reality check: Beating Vanderbilt hasn't been a given in recent years for the Vols and making that more of a foregone conclusion than a rivalry game is an important part of Tennessee's resurgence.

Reality check: Nittany Lions took care of business in their non-Michigan/Ohio State games and showed signs to be excited for the next couple of seasons with freshmen such as LB Abdul Carter and RB Nick Singleton.

Reality check: Some down-ballot Heisman love show go to Michael Penix Jr., the Indiana transfer whose career was stalled by injury and now leads the country with 4,354 yards passing.

Next: vs. No. 24 North Carolina at Charlotte, N.C., in the Atlantic Coast Conference championship, Saturday.

Reality check: Dabo Swinney has tried hard to deflect blame from QB DJ Uiagalelei for the offensive struggles. Two things can be true. Receivers have not provided good enough support. The quarterback has not passed well enough.

Next: vs. No. 1 Georgia at Atlanta in SEC championship, Saturday.

Reality check: The offense has often been too reliant on QB Jayden Daniels, both running and passing.

Reality check: Utes are a resilient and experienced bunch as the program makes its fourth conference title game appearance in five seasons.

Next: vs. No. 3 TCU at Arlington, Texas, in Big 12 championship, Saturday.

Reality check: One of the low-key best coaching jobs of the season comes from Chris Klieman and his staff as the Wildcats play their deliberate and efficient style to perfection.

Reality check: Seminoles are as good at creating explosive running plays as any team in the country, with 34 carries of at least 20 yards.

Reality check: Special teams failures and unreliable defense led coach Dan Lanning to push the envelope on fourth down all season. The decisions backfiring at times wasn't the problem. The poor special teams and defense was the problem.

Reality check: A remarkable performance by coach Jonathan Smith's Beavers, who played around limitations at quarterback almost all season.

Reality check: Might have gotten a glimpse of the future at running back for UCLA against Cal with 210-pound freshman TJ Harden running for 89 yards on 12 carries.

Next: vs. No. 22 in American Athletic Conference championship, Saturday.

Reality check: A season-high 181 yards on 35 carries from a 195-pound tailback with a conference title game appearance on the line. Tyjae Spears had one of the best individual performances of the college football season against Cincinnati.

Reality check: There will be a what-could-have-been feeling around this team because of a couple of really bad losses, but the growth throughout the season was undeniable.

Reality check: QB Spencer Rattler threw half his touchdown passes (eight) and almost 30% of his season's total yards (798) in the last two games against Tennessee and Clemson.

Reality check: Longhorns QB situation going forward will be one of the most watched in the country. Quinn Ewers showed flashes in an inconsistent first season as starter. And soon Arch Manning arrives in Austin.

Next: at No. 18 Tulane in AAC championship, Saturday.

Reality check: Knights stumbled into the conference title game splitting games against Navy and South Florida, but they still might have the highest ceiling in the AAC.

Next: vs. North Texas in Conference USA championship, Friday.

Reality check: An overtime loss in the first game of the season to Houston is probably the only thing keeping the Roadrunners from getting more serious consideration to be the Group of Five's representative in the New Year's Six bowls.

Next: vs. No. 10 Clemson at Charlotte, N.C., in ACC championship, Saturday.

Reality check: Tar Heels crashed as soon as QB Drake Maye's Heisman campaign started to take hold. He still might be worthy of a trip to New York.

Reality check: The Egg Bowl was a chance for the country to get a good look at LB Tyrus Wheat, one of the most disruptive players in the country.