Apple Cup tops this week in the Pac-12 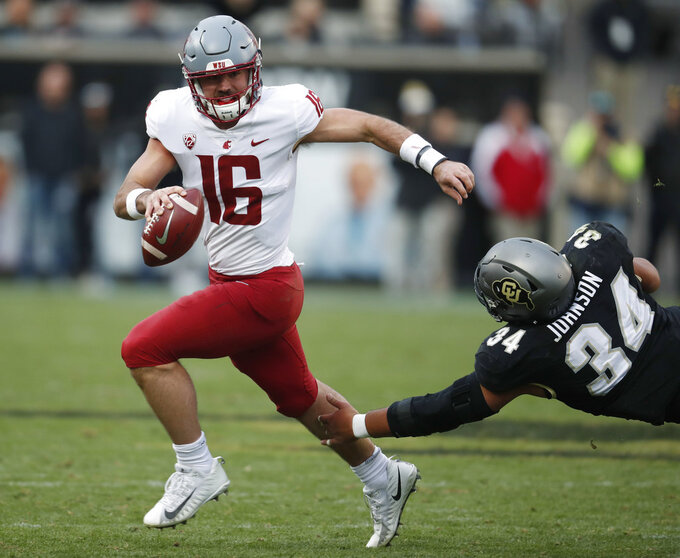 FILE - In this Nov. 10, 2018, file photo, Washington State quarterback Gardner Minshew, left, scrambles away from Colorado defensive lineman Mustafa Johnson in the second half of an NCAA college football game, in Boulder, Colo. Minshew nearly decided to spend this season at Alabama, where he almost certainly would have backed up Tua Tagovailoa the entire year. The East Carolina graduate transfer instead chose Washington State and has emerged as one of Tagovailoa’s top competitors for the Heisman Trophy. (AP Photo/David Zalubowski, File)

GAME OF THE WEEK: No. 16 Washington at No. 7 Washington State. The Apple Cup is always the biggest game on the schedule for both teams. The 111th version has huge Pac-12 implications and possibly beyond. The Cougars (10-1) are 7-1 in the conference and the Huskies are 6-2, with no one else really close. That makes Friday's game essentially the play-in game to represent the Pac-12 North in the conference title game. On top of that, Washington State still has slim hopes of making the College Football Playoff, which would disappear with a loss to Washington. It's the third straight year both teams are ranked heading into the Apple Cup and the Huskies have won the past five meetings. This should be good.

MATCHUP OF THE WEEK: Arizona State at Arizona. The first meeting for the Territorial Cup for Arizona under coach Kevin Sumlin and Arizona State under Herm Edwards. The Sun Devils (6-5) have clinched bowl eligibility, but the Wildcats (5-6) still need a win to get into the postseason, so there's added incentive on both sides of this rivalry. Arizona leads the all-time series 49-41-1, but the Sun Devils won the 90th Duel in the Desert last season 42-30 in Tempe. Arizona State RB Eno Benjamin needs 121 yards rushing to set the school single-season mark.

UPSET WATCH: BYU at Utah. A rivalry game, so the Utes will likely be up for this game, but they're coming off the high of clinching the Pac-12 South title and have the Pac-12 Championship game coming up. The Cougars are just 6-5 but have wins over Arizona and then-No. 6 Wisconsin with a close loss to California on their resume.

IMPACT PERFORMER: UCLA RB Joshua Kelly. The Bruins running back ran for 289 yards and two TDs on 40 carries in the Bruins' 34-27 victory last week. The yards were most in the history of the rivalry and third most in UCLA history.