Army-Navy at Meadowlands, with 20th anniversary of 9/11 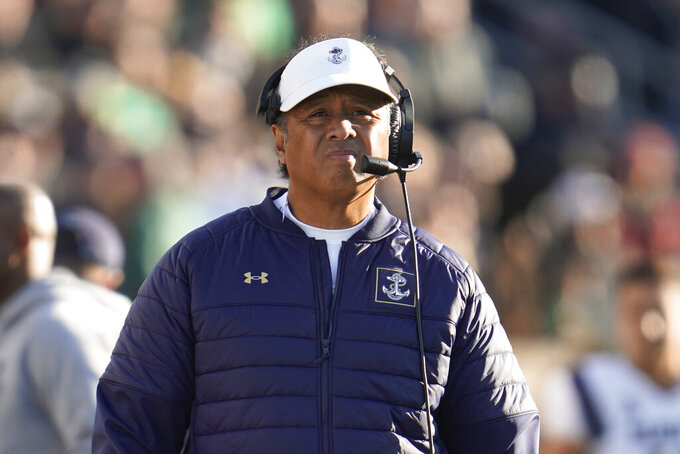 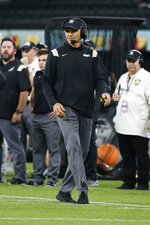 EAST RUTHERFORD, N.J. (AP) — As coaches and players from Army and Navy walked into MetLife Stadium on Wednesday, the backdrop was the skyline of New York City.

One of college football's biggest rivalries will return to the Meadowlands for the first time since 2002 when Army (8-3) takes on Navy (3-8) on Dec. 11.

While the game is usually played in Philadelphia, it's returning to the New York area to coincide with the 20th anniversary of the 9/11 attacks that killed nearly 3,000 people. The attacks launched the United States into a war on terrorism that was led by many service academy graduates.

Army coach Jeff Monken said playing the game less than 10 miles from the site of the World Trade Center Towers honors all those affected physically, mentally and emotionally by the tragedy. It also honors those who answered the call to serve, he said.

“Over the last 20 years, we’ve lost hundreds of Americans in that war, in that war on terror, and thousands and thousands have been affected," Monken said Wednesday at a luncheon 10 days ahead of the game. "So to have it here, on this stage, at this stadium, on the 20-year anniversary, I think is very appropriate.”

Navy coach Ken Niumatalolo will participate in his 24th game against Army, the last 14 as the head coach of the Midshipmen.

“These two institutions that have had people who served and paid the ultimate sacrifice because of the conflicts that occurred from 9/11,” he said. “To be able here to remember those people and all who lost their lives, the 9/11 people in the towers, first responders, everything that transpired from that day; to be able to remember them and pay tribute to them, I think it’s only fitting that we are the two schools to do it.”

Niumatalolo said he has stayed in touch with many of his former players. Some come back to visit. Some have joined his coaching staff and some he has either talked with or exchanged messages. Most have served.

“They talked about: ‘Hey, coach, do you remember so-and-so that played linebacker or offensive guard at Army, we served together, and he is actually a really good guy,' and they actually get to know each other and become friends."

Niumatalolo said talk like that brings the rivalry into focus.

“It’s kind of cool, in this heated rivalry where we want to beat them, they want to beat us" but what they do afterward is “you’re trying to protect somebody ... when you go out and serve.”

The series had gone through a recent shift in winning streaks. Navy won 14 games in a row, but Army has won four of the last five, including three by seven points or less. The Cadets posted a 15-0 win last season in a game played at West Point because of the COVID-19 pandemic.

This season Army has posted its fifth winning season in the eight years under Monken. It will be headed to a postseason bowl game, with the announcement coming Sunday. A win for the Cadets will give them the Commander in Chief's Trophy, since they also beat Air Force.

Navy's season will end next weekend. Senior wide receiver Mychal Cooper said beating Army in the final game would be the ultimate.

“That's what you dream about, that's what you came to school for, to play in the Army-Navy game, win and go home happy,” he said.