'Ball of energy' McCaffrey out to rev up Nebraska offense 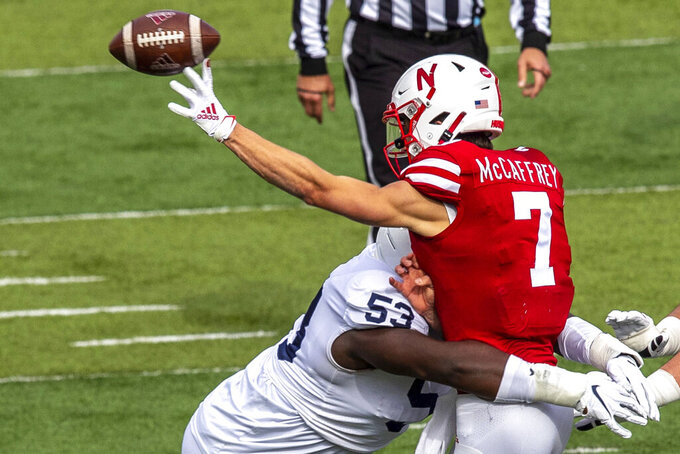 Robinson lived with McCaffrey when they first arrived at Nebraska last year, and he quickly discovered the Cornhuskers' new starting quarterback doesn't know how to dial it down. There's always pep in his step, a slap on the back for everyone on the sideline, a can-do attitude regardless of the situation.

“I feel like he has that fire in him to get other guys going and I think that’s going to be key for our offense,” Robinson said. “He's got that fire, that competitive edge where we’re going to start seeing good things happen.”

The Huskers (1-2, 1-2 Big Ten) beat Penn State 30-23 last Saturday for their first win since Nov. 23, 2019. McCaffrey's starting debut was overshadowed by the defense, which made two big stops late in the game after the offense spent most of the second half sputtering.

The move from Adrian Martinez to McCaffrey wasn’t a huge surprise, though. The little brother of NFL star Christian McCaffrey had flashed playmaking ability in multiple roles last year and coach Scott Frost knew his offense was better with Luke McCaffrey on the field.

Frost said in the offseason the plan was for McCaffrey to focus on being a quarterback rather than a receiver this season. The preseason competition between Martinez and McCaffrey was neck-and-neck, and Frost said he would have been comfortable with either one as the starter, but Martinez separated himself because of his incumbency.

Frost said McCaffrey was “really solid” against Penn State. The redshirt freshman from Highlands Ranch, Colorado, threw for 152 yards and ran for 67 and, true to his personality, popped up quickly each time he was tackled. He also had a hand in two touchdowns.

That doesn't mean McCaffrey has the job locked up.

“It will always be the same: whoever gives us the best chance to win is going to be out there,” Frost said, “and whoever practices the best.”

McCaffrey accounted for 135 yards playing three positions against Ohio State. He stood ready on the sideline against Northwestern, helmet always on, but didn’t get into the game until late in the third quarter other than being a decoy for one play in the first half.

Though fans have clamored to see more of McCaffrey since the middle of last season, he said it wasn't hard waiting for his chance to start.

“I think patience is a very valuable skill for anybody, especially for an athlete,” he said. “When it comes to evaluation, I consider myself my hardest critic, and moving forward there are things that can be cleaned up, and efficiency will continue to grow.”

McCaffrey's signature play against Penn State came late in the first half. With a pass rusher closing in, he switched the ball from his right to left hand and dumped it off to Marvin Scott III. The third-and-9 play netted 14 yards, and the Huskers kicked a field goal to lead 27-6 at halftime.

Frost had no problem with the play because it worked.

“I told him this morning I never want to curtail their creative ability as football payers,” Frost said. “You have to be disciplined when you do those things and make sure they don’t turn into negative plays.”

McCaffrey said Martinez has been supportive. Martinez, who didn’t play against Penn State, had started all 23 of his career games and is in his second year as a team captain.

“He’s been right there by my side," McCaffrey said, "and he’s been one of the best role models, best people and best leaders that I’ve been able to meet.”

Nebraska center Cam Jurgens said the offense runs smoothly with either quarterback. McCaffrey does bring an intangible, though.

“Luke has always got an insane amount of energy,” Jurgens said. “He’s always bouncing around. I think some of the people feed off his energy.”

McCaffrey said he gets his zest for life from his mom, Lisa McCaffrey. She was a three-year starter in soccer at Stanford and, he said, is passionate about everything she does. Luke's dad is three-time Super Bowl champion Ed McCaffrey.

Asked if Luke's energy is on all the time or if it ever wanes, his old roomie Robinson said, “All the time, and I love it.”