Blough's resurgence has Purdue in position to make a charge 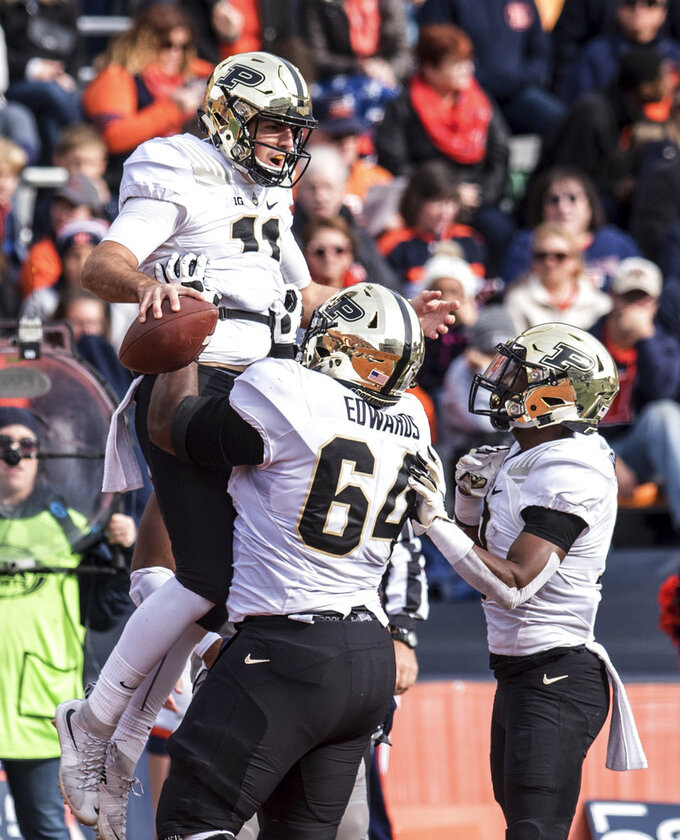 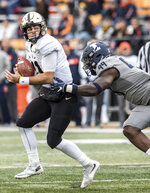 While being whisked away in an ambulance with a gruesome ankle injury last November, he kept telling himself he'd make it back. When Blough did limited work at spring practice, he insisted his quick recovery would help him reclaim the starting job. And when he was eventually beaten out by Elijah Sindelar in August, he kept preparing for his next big chance.

Since replacing the injured Sindelar in Week 3, Blough has thrived by doing everything coach Jeff Brohm could ask — throwing passes, eliminating turnovers, even catching a touchdown pass.

"What a difference a year makes! Thank you God!" the devoutly religious Blough posted on Twitter following Saturday's 46-7 victory over Illinois.

The moment could not have been any sweeter for Blough. He was hoisted up by his teammates after catching a 7-yard scoring pass from receiver Jared Sparks and he left the field carrying the Purdue Cannon, rekindling images of Joe Namath's Super Bowl celebration.

Sindelar, who finished last season by leading the Boilermakers to three straight wins on a torn anterior cruciate in his left knee, won the preseason battle. He was benched after throwing three interceptions in the first half of Purdue's season opener against Northwestern, and Blough officially reclaimed the starting spot when Brohm announced Sindelar had an undisclosed injury before a Week 3 matchup against Missouri.

Blough has played lights out.

Since then, Blough has led the Boilermakers (3-3, 2-1 Big Ten) to three straight wins and gotten them back in position to potentially challenge No. 23 Wisconsin for West Division supremacy.

"That's the goal, to work your way up the ladder," Brohm said after Purdue's most lopsided conference victory since Joe Tiller's farewell game against Indiana in 2007. "While we didn't get off to a good start, we're finding a way to inch back in the picture. That's what you want to do."

And Blough is the biggest reason.

In the last four games, he has completed 110 of 181 passes (68.3 percent) with 1,573 yards, 10 touchdowns and two interceptions. He's also rushed for two scores and became the first Purdue quarterback to catch a TD pass since Brandon Hance in 2001.

"That was probably the best pass throw all day," Blough joked Saturday. "Jared Sparks made a great throw with the safety bearing down on him."

Brohm acknowledged Monday he still believes in Sindelar but wants him to be "fully healed" before putting him back on the field. Besides, why make a change with Blough playing so well?

If he starts this weekend against No. 2 Ohio State, Blough will move past NFL Hall of Famer Bob Griese and Eric Hunter for No. 6 on the school's career starts list by a quarterback since 1960. Three more starts would send him past former NFL quarterback Scott Campbell for No. 5 and if Blough closes out his college career by starting Purdue's final six regular-season games and a potential bowl game, he would tie Drew Brees for No. 3.

Not that Blough is concerned with any individual stats or awards.

His goal is simply to keep playing the way he always knew he could.

"We fought back," Blough said. "You keep going, you keep swinging."