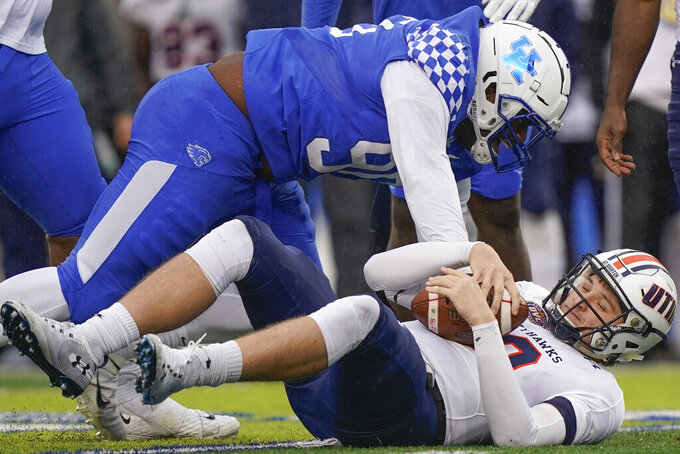 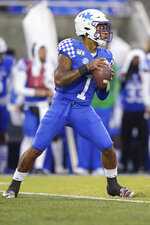 Lynn Bowden rushed for 129 yards and two touchdowns to lead Kentucky to a 50-7 win over UT Martin on Saturday and into the postseason for the fourth straight season.

Bowden eclipsed the 100-yard plateau for the fifth time this season as the Wildcats shattered a single-game school record with 462 yards rushing. Kentucky has rushed for 863 yards in the past two games.

“It was really fun to put together a complete game,” Kentucky coach Mark Stoops said. “… when you outrush somebody by 470 yards, you have a pretty good opportunity to win.”

Bowden praised the team’s offensive line, saying “all the credit goes to them” and added reaching bowl eligibility “means a lot.”

“Everyone doubted us — they said we wouldn’t be good,” he said. “Our record may not show it, but I think we are pretty damn good.”

Although Stoops admitted he wasn’t aware of breaking the school rushing mark until the end of the contest, he was elated by the feat.

“You’re just in the moment, trying to find the best opportunity to win,” he said. “… we’ve played good back-to-back weeks.”

Kentucky (6-5) finished with 479 total yards and can improve its postseason status in the regular-season finale against Louisville next Saturday.

Bowden made his sixth consecutive start at quarterback and guided the Wildcats to four victories during that span.

Bowden didn’t attempt his first carry until the second quarter and used a 58-yard run to set up his own 2-yard TD burst to give the Wildcats a 22-0 lead with 5:36 remaining in the first half. Bowden finished with 89 yards rushing and two touchdowns in the opening half.

AJ Rose added 105 yards on six carries with one touchdown for Kentucky. Overall, six running backs rushed for 40 yards or more and freshmen Travis Tisdale and Tyler Markray each scored their first career touchdowns — both coming in the fourth quarter.

The FCS Skyhawks (7-5) scored their lone touchdown on Jaimiee Bowe’s 6-yard run with 11 minutes remaining in the game.

On the first play from scrimmage, UT Martin center Austin Newsom snapped the ball over quarterback John Bachus III’s head, leading to an intentional grounding call and a safety for the Wildcats. On the Skyhawks’ next series, Yusuf Corker recovered a bad snap in the end zone, giving the hosts a 9-0 lead 2:08 into the contest. The Wildcats scored 16 points in four plays to open the game.

According to a report by 247 Sports on Saturday, Kentucky coach Mark Stoops met with Florida State University officials in Cincinnati last week concerning the Seminoles’ coaching vacancy and has withdrawn his name from consideration. Stoops served as defensive coordinator for the Seminoles from 2010-12.

“I had a great experience there,” Stoops said. “It afforded me the opportunity to be here. This where my heart is. This is where I want to be. So, I’m going to be at Kentucky.”

Kentucky: The Wildcats held the Skyhawks to just 204 total yards, including 10 in the first half. Kentucky has limited its past six opponents to just 305 yards or less. Kentucky’s defense forced five fumbles and scooped up two of those miscues. The Wildcats had 11 tackles for loss and collected five sacks totaling minus-24 yards.

UT Martin: Coming off a 2-9 campaign, the Skyhawks finished with a 7-5 record and finished third in the Ohio Valley Conference. UT Martin fell to 1-28 against FBS teams and the lone win over a higher division opponent was a 20-17 victory over Memphis in 2012. Kentucky defeated the Skyhawks 59-14 in the previous meeting between the two teams in 2014.

Kentucky: The Wildcats close out the regular season when they host Louisville on Saturday.