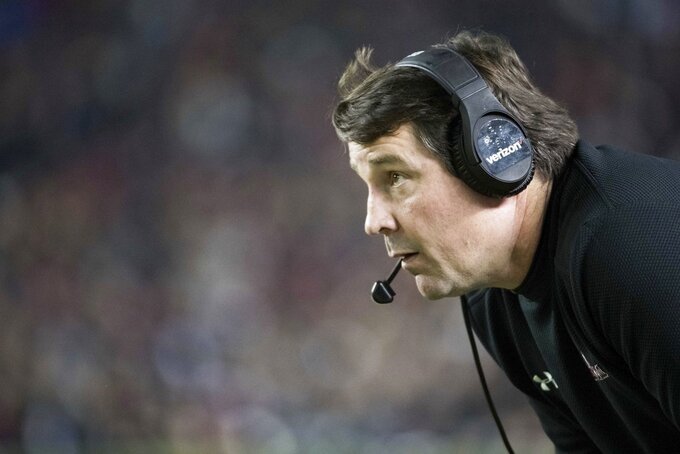 FILE - In this Saturday, Nov. 17, 2018, file photo, South Carolina head coach Will Muschamp watches an extra point attempt during the first half of an NCAA college football game against Chattanooga in Columbia, S.C. The Gamecocks conclude the regular season on Saturday and try to enhance their bowl position against Akron after a September cancellation due to Hurricane Florence. (AP Photo/Sean Rayford, File)

COLUMBIA, S.C. (AP) — When Terry Bowden was coaching Auburn he saw just what he needed in graduate assistant Will Muschamp 23 years ago. So it's no surprise to when that Muschamp has excelled running a program.

He will get see firsthand how much Muschamp has learned this weekend.

Brown's Akron Zips (4-7) face Muschamp's Gamecocks (6-5) to close the regular season in a makeup game after South Carolina's contest with Marshall on Sept. 15 was canceled due to Hurricane Florence. Akron saw its season-opener at Nebraska called off because of lightning and strong storms.

Bowden brought Muschamp on at Auburn after he finished his career as a Georgia defensive back in 1994.

"I just remember what an intelligent ballplayer he was. He was savvy, tough guy, a leader," Bowden said earlier this week. "I liked the way he carried himself as a player. Then, finding out he wanted to be a coach, he's the guy I look for when I'm looking for graduate assistants. I think he's turned out everything I thought he would."

When Muschamp's time as a graduate assistant was over, he took a position outside of football. But that didn't stick for long with Bowden's encouraging words that Muschamp could be a successful teacher, mentor and football coach.

"To get reassurance from a guy who was head coach at Auburn University and was having a good run at the time, to tell you to stick with this thing," Muschamp said. "There was no doubt, I appreciate his words."

Muschamp has the Gamecocks on a positive track . He's the first South Carolina coach to start with three consecutive bowl appearances. And Muschamp's aiming higher, telling his team to treat this extra week of game practice as a rehearsal for next year in preparing for a Southeastern Conference title game.

"The guys will tell you, I like to be able to practice things," Muschamp said.

A win should enhance the Gamecocks bowl destination.

Bowden, in his seventh season at Akron, said the Zips had hopes of reaching a bowl game, too, when they agreed to a 12th game in early November. However, four consecutive losses this month ended that goal.

Some other things to watch for when South Carolina plays host to Akron:

South Carolina quarterback Jake Bentley is on a major roll. He had career highs of 510 yards passing and five touchdowns in last week's 56-35 loss at No. 2 Clemson. Over his past four games, Bentley has thrown for 1,451 yards and 13 TDs and just two interceptions. The junior was on NFL scouts radar when the year began. His recent play has revived talk of turning pro after this year. Bentley and coach Will Muschamp say the focus is solely on Akron.

BOWDEN ON THE SIDELINE

Even though it's his second game as a head coach at South Carolina, Akron's Terry Bowden will mark his first time on the sideline. The other occasion, as Auburn's head coach in 1997, Bowden had to stay up in the coaching box due to a back injury. The eighth-ranked Tigers improved to 5-0 that year with a 23-6 win over the Gamecocks.

Will Muschamp spoke nimbly when asked why Bentley's performance didn't earn any Player of the Week recognition from the SEC. After stating that it's a team game and Bentley's output was the product of many players' hard work and preparation,

Muschamp said people should be recognized for doing something extraordinary. No one in SEC history, Muschamp said, had ever thrown for that many yards against a top Five opponent. Muschamp then said, ":We have a saying, 'It just means more.' It just means more, sometimes, depending on what your logo is. Call it like it is."

Akron has something South Carolina does not: A victory over a championship game participant this weekend. The Zips had two pick-six touchdowns in a 39-34 victory at Northwestern this past September. The Wildcats play Ohio State for the Big Ten championship on Saturday.

South Carolina holds an 8-3 mark over teams from the Mid-American Conference. This is the first time the Gamecocks have played a MAC opponent since defeating Eastern Michigan 41-6 in 2000.