Bowl eligibility up for grabs for Tennessee, South Alabama 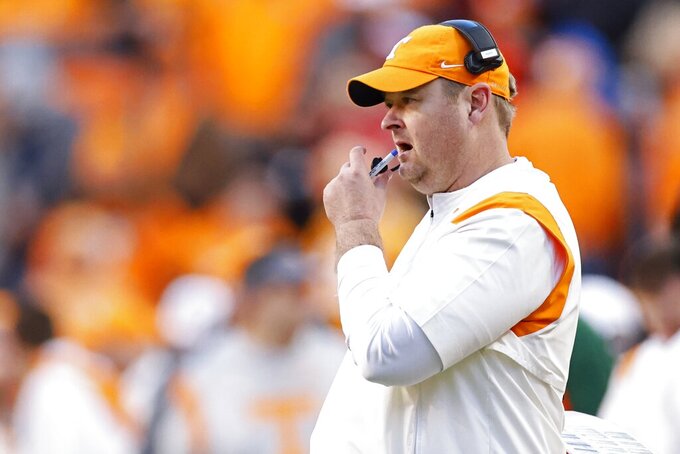 Tennessee head coach Josh Heupel talks on his headset during the first half of an NCAA college football game against Georgia, Saturday, Nov. 13, 2021, in Knoxville, Tenn. (AP Photo/Wade Payne)

"It’s big because it shows progress in year one, just over the course of the season,” Heupel said.

Earning a bowl berth also means more practices in December for an opportunity to keep developing younger players along with weeks inside the weight room.

"All those things are huge as you push your program forward,” Heupel said.

Another chance to grow comes if the Vols (5-5) can avoid a letdown after the electric environment last week. Tennessee lost 41-17 to No. 1 Georgia before an announced crowd of 100,074 that included Peyton Manning and Candace Parker.

“Control the controllables, control your preparation, be really consistent in who you are,” Heupel said. “No matter what the stadium looks or sounds like, how juicy it is in there, our competitive nature has to be the same and really consistent.”

South Alabama also has a first-year coach in Kane Wommack with the Jaguars (5-5) also a win away from their own postseason bid. They are coming off a 31-7 loss to Appalachian State, and this is the last of a three-game road swing. South Alabama wraps up the season hosting Coastal Carolina.

“I’ve gone against tempo offenses in a lot of different leagues, but I would say probably Tennessee is the fastest I’ve ever seen in terms of their tempo," Wommack said.

Tennessee comes in having outscored opponents 148-44 in the first quarter this season. The Vols have led after 15 minutes in eight of their first 10 games. That includes the last three with all ranked: No. 4 Alabama, No. 17 Kentucky and Georgia, a team that hadn't allowed a touchdown until Tennessee scored on its opening drive.

Jake Bentley, who played quarterback at South Carolina and Utah before arriving at South Alabama this season, won’t be available against Tennessee. He tore a MCL in his left knee against Troy a couple weeks ago and hasn’t played since. Sophomore Desmond Trotter has taken his place.

“We’ve got a bunch of explosive guys on the offensive side of the ball,” Trotter said. “Being able to get them the ball to be able to produce for our team is going to be huge.”

Heupel said he will wait until the end of the regular season to see if quarterback Hendon Hooker intends to use the year of eligibility he has remaining. Hooker is a graduate transfer from Virginia Tech, but he has an extra year available because of the pandemic.

Hooker is on pace to set a pair of school records. He's sixth nationally with a 190.01 passer efficiency rating, well above the 163 rating Darryl Dickey posted in 1985. Hooker, who has thrown 22 touchdown passes with only three interceptions in 223 attempts, is completing 68.6% of his passes. Erik Ainge set the current mark of 67% in 2006.