Coastal coach: QB McCall could be out for the season 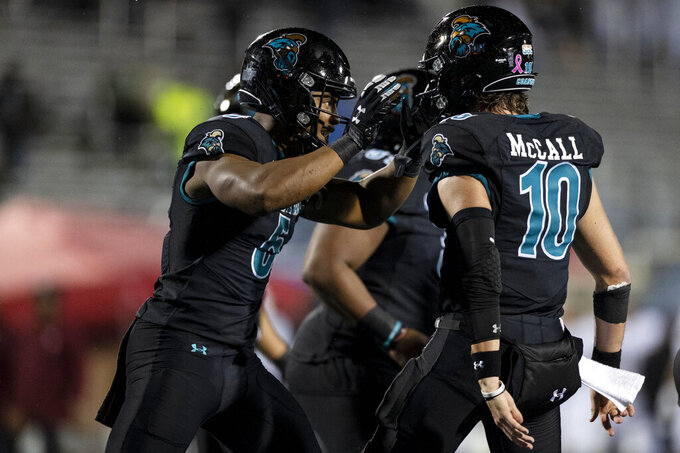 Coastal Carolina running back Shermari Jones (5) and quarterback Grayson McCall (10) celebrate a touchdown during the second half of the team's NCAA college football game against Troy on Thursday, Oct. 28, 2021, in Conway, S.C. (AP Photo/Matt Kelley)

“We don’t know how long he’s going to be out,” Chadwell said Monday on a Sun Belt Conference coaches teleconference. “We hope to get him back before the end of the regular season."

Chadwell said McCall was hurt during a 35-28 victory over Troy on Oct. 28. McCall came out for several plays in the third quarter after dropping to the turf. However, he returned to the game and said during postgame interviews that he felt OK.

Chadwell said McCall has had several tests to pinpoint the problem and he is hopeful his standout passer, the FBS leader in pass efficiency, will be back.

“He could be out the rest of the season, based on the recovery ... he could come back before then," Chadwell said. “We really don’t have a complete answer right now.”

Senior Bryce Carpenter filled in for McCall against Georgia Southern and will start Saturday when the Chants (8-1, 4-1 Sun Belt) take on Georgia State (4-5, 3-2).

Carpenter has made nine career starts for Coastal Carolina.