Doc Holliday out as Marshall coach despite conference honors 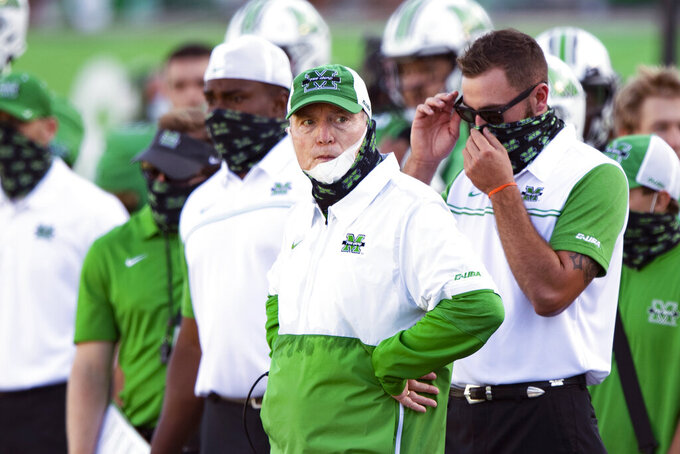 Marshall football coach Doc Holliday is out after 11 seasons with the Thundering Herd after the school said Monday it would not renew his contract.

Holliday was named Conference USA coach of the year, but the Thundering Herd lost their final three games of the season after starting 7-0 and moving up to No. 15 in The Associated Press poll.

“I want to thank Doc Holliday for the leadership he has provided this program over the past 11 seasons,” Marshall athletic director Mike Hamrick said in a statement. “In addition to his success on the field, he ran a clean program, graduated his student-athletes and prepared young men for life after football.”

Marshall President Jerome Gilbert said a search committee led by Hamrick is being formed to help identify candidates. The university said Hamrick won’t comment publicly until the job has been filled.

Marshall’s defense led the nation with 13 points allowed per game and gave up the second-fewest yards at 279 per game. But Marshall was outscored 59-23 in its final three games.

Holliday led Marshall to the 2014 Conference USA championship and two other appearances in the title game, including this season. Under him, Marshall had three straight 10-win seasons from 2013-15.

Marshall was the first head coaching job for Holliday, who is known as a solid recruiter and spent three decades as an assistant, most oat West Virginia. When Holliday took over in 2010, Marshall hadn’t had a winning season since 2003.