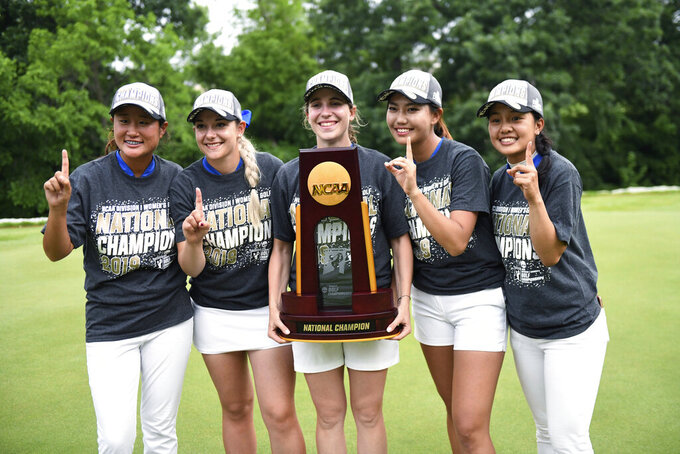 FILE - In this May 22, 2019, file photo, Duke's Gina Kim, Ana Belac, Virginia Elena Carta, Miranda Wang, and Jaravee Boonchan celebrate with the trophy after defeating Wake Forest in the final of the NCAA women's golf tournament in Fayetteville, Ark. Duke was the only school in the country to win its bowl game in football, reach the NCAA Tournament Sweet 16 in men’s basketball and advance to the super regionals of the NCAA baseball tournament. And it's women’s golf team claimed its seventh national title since 1999. Yet athletic director Kevin White called it a good _ but not great _ year overall. (AP Photo/Michael Woods, FIle) 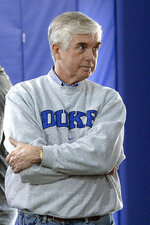 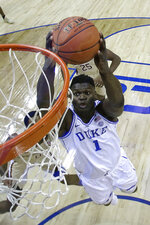 Yet athletic director Kevin White called it a good — but not great — year overall.

That speaks to how high White has set the bar at Duke.

"We were really close to having one of those really historic years, epic years," White said in an interview with The Associated Press. "When I say that, I guess it's semantics to talk about really good ... I'm talking about epic. Historic. We had a chance to have our very best year. And we didn't quite have that. Close, but not quite there. Moving forward to this next year, we've got a chance to have another really spectacular year."

Duke finished ninth in the final standings for the Directors' Cup, given to the top overall athletic department in the country, its best finish since it also was No. 9 in 2014.

Duke was the only school in the country to win its bowl game in football, reach the NCAA Tournament Sweet 16 in men's basketball and advance to the super regionals of the NCAA baseball tournament. And its women's golf team claimed its seventh national title since 1999, with White saying coach Dan Brooks is "amazing, and his kids were brilliant."

But without question, the dominant storyline in Durham this year was the phenomenon of Zion Williamson.

The buzz that always surrounds coach Mike Krzyzewski's powerhouse basketball program was kicked up a few notches this season thanks to Williamson, the telegenic freshman who made highlight-reel dunks commonplace while helping lead the Blue Devils to the brink of a Final Four berth.

White said it's hard to measure the impact Williamson had during his lone year on campus before he became the No. 1 overall pick in the NBA draft.

"What Mike Krzyzewski has done with our basketball program, it is nothing less than mind-boggling," White said. "The impact that men's basketball, during his four-decade career here, has had on this institution is absolutely immeasureable, and anybody that wouldn't understand that or see that isn't paying attention. It's amazing. Our institution is red-hot."

Perhaps the lasting image of the season was Williamson's left foot sticking out of the remnants of his Nike PG 2.5 shoe, moments after it had ripped apart during the first minute of Duke's home game against North Carolina. It touched off a days-long firestorm in which Nike's stock price tumbled and the shoe manufacturer's reputation took a hit.

Nearly six months have passed since the shoe blowout, and White said Duke's relationship with Nike remains "as strong as ever." Duke has been a Nike school since 1992, and most recently signed a 12-year contract with Nike in 2015. The private school has not disclosed the financial terms of the agreement.

He said Nike representatives were in Durham the next morning to straighten things out, and when Williamson returned to action in the ACC Tournament after missing six games with a sprained knee, he did so in a pair of specially modified Nike Kyrie 4 shoes from Boston Celtics star — and former Duke guard — Kyrie Irving.