Experience abounds as Virginia looks to rebound from 2020 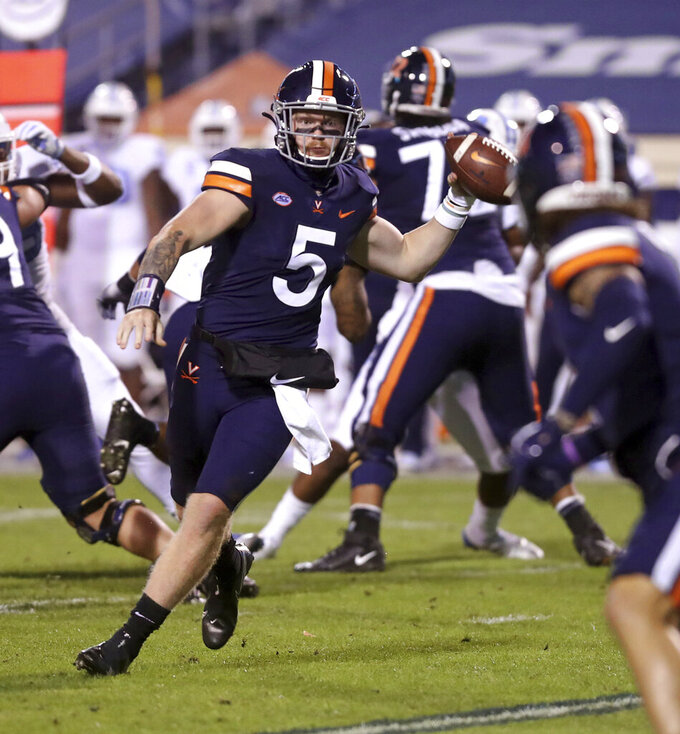 CHARLOTTESVILLE, Va. (AP) — Perhaps the first sign that Virginia's players were disappointed with how last season went came quickly after it ended in a 33-15 loss to Virginia Tech.

The following day, coach Bronco Mendenhall announced that the team, bowl eligible in the strangest of seasons at 5-5, had voted not to participate in the postseason.

Eight days later, he announced that 17 fourth- and fifth-year players, several of them NFL prospects who had already exhausted their eligibility, planned to take advantage of the NCAA decision that all players from last season be granted another year of eligibility.

Defensive end Mandy Alonso, one of eight returnees taking advantage of that extra year, said the loss to the Hokies “just left a bad taste in my mouth this whole offseason."

Even Keytaon Thompson, a quarterback turned all-purpose threat who transferred from Mississippi State last year said the loss to the Hokies gnawed at him for a long time, especially when rib injuries prevented him from being able to do much working out.

“That was all I was able to think about, our rival game,” he said.

On defense, safety Joey Blount returns after missing half of last season with what was termed a “lower body injury,” and may be the team's most important defender. He'll lead a secondary that allowed more than 300 passing yards per game last season but brings back much upper class experience and two transfers expected to compete to start.

Here are some other things to watch at Virginia in 2021:

Brennan Armstrong is back at quarterback and so is Thompson. After competing for the job last season, the two are happy to be working in concert.

“Our relationship is a lot, a lot better than what it started off to be, obviously,” Armstrong said. “I'm super excited where we are now with him because he plays a huge impact in our offense.”

Thompson ran for 236 yards and two touchdowns, averaging 6 yards per carry, completed one pass and caught seven, including three for touchdowns in 2020.

“I can do whatever you need me to do,” he said.

Mendenhall has an interesting view on taking graduate transfers: He likes that, by graduating, they've shown their commitment to the academic side, needs to like them as a person and said he only considers bringing on players with a chance to start.

Virginia helped itself at tight end by bringing in 6-foot-7, 265-pound Jelani Woods from Oklahoma State. He's expected to help as both a dominant blocker and pass catcher.

Among the five other transfers, cornerbacks Josh Hayes from North Dakota State and Anthony Johnson from ACC rival Louisville are expected to provide needed depth.

The Cavaliers are 17-2 at home the past three seasons, but just 3-11 on the road, and while Mendenhall almost doesn't like to count last season's 0-4 ledger, he knows that finding a way to perform better away from home is the next step up in the program's growth.

“The year we won the Coastal, again we were dominant at home and beat not only Pitt but UNC on the road,” he said. “That's the next level of expansion, to have consistency in our program, to maintain what we're already doing at home, which is very strong, and then that has to travel, and that hasn't yet. That's one of the areas of growth.”

Technically, Virginia is the defending Coastal Division champions because the Cavaliers won the division in 2019 and there were no divisions in the pandemic season, but several of the returnees are back determined to leave on a much better note.

“You could say that we’re defending it, but I just see it as a new year,” Alonso said.

The Cavaliers will play two of the three conference teams ranked in the preseason Top 25, No. 10 North Carolina and No. 13 Miami. They'll also face No. 9 Notre Dame and Illinois of the Big Ten in Charlottesville and finish at home against the Hokies.