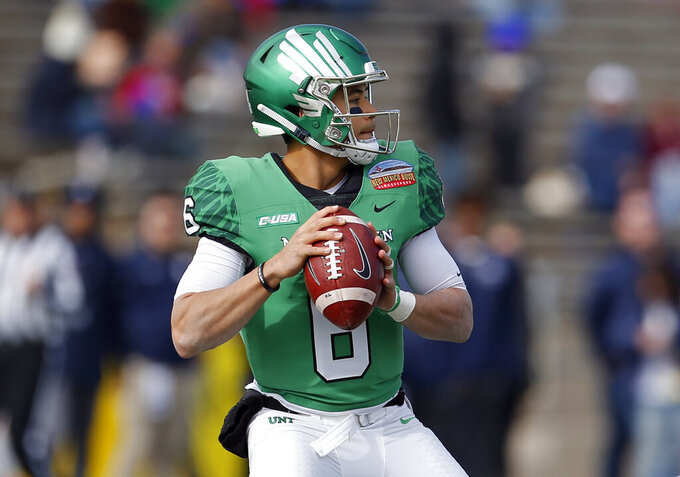 FILE - In this Dec. 15, 2018, photo, North Texas quarterback Mason Fine looks to throw a pass during the first half of the New Mexico Bowl NCAA college football game against Utah State in Albuquerque, N.M. North Texas is favored to win West Division in Conference USA. Fine began his first camp way down on the depth chart--maybe sixth or seventh behind the transfer quarterback who did start the first game of the 2016 season. But Fine got into the opener as a true freshman, and has been UNT’s starter since taking that role his second game. (AP Photo/Andres Leighton, File)

DENTON, Texas (AP) — Mason Fine was a 150-pound quarterback whose prep career had just ended with a lopsided shutout loss in the playoffs after an undefeated season until then. With no significant college offers despite several Oklahoma passing records, he just wanted to be alone in the school's field house.

"My high school career is over and I don't know where I'm playing football at next," Fine said. "Seemed like my dream's not going to come true because no one's looking at me."

But about the same time south of the Red River, newly hired North Texas coach Seth Littrell was in search of a quarterback.

Littrell, an Oklahoma native who was on the Sooners' 2000 national championship team, was an offensive coordinator at three different Power Five schools (Arizona, Indiana and North Carolina) before getting his first head coaching job. He was also good friends with the coach at Locust Grove High, where Fine set state records with 13,081 yards and 166 touchdowns passing.

"That obviously helped," said Littrell, who admittedly might not have noticed the undersized quarterback if not for his old friend. "But once you found out about him, and you really broke down the film and you started studying, and you start comparing him versus other quarterbacks you're looking at, it was a no-brainer."

Going into their fourth year together at North Texas, coming off a 1-11 record when Littrell and Fine arrived, the Mean Green have consecutive nine-win seasons for the first time since 1977-78 under coach Hayden Fry. They open this season at home Saturday night against FCS team Abilene Christian.

Fine, who is about 5-foot-10 and now closer to 190 pounds, is already UNT's career passing leader and has been Conference USA's top offensive player each of the past two seasons. Fine is the FBS active leader with 9,417 yards passing and 64 touchdowns.

"On social media and stuff, people are starting to take notice of North Texas and how explosive, and how potent this offense is and can be," Fine said. "Before I played my sophomore year, I think there were more doubters than there are now."

While Fine has always been driven to prove wrong the people who doubt him, and prove right those who support him, his main goals are focused on the team over his own numbers.

"I guarantee you he would throw away every single record he's had here, if it meant him and his teammates winning the championship together. That's what's driven him, all the way back to high school," Littrell said.

"There's no reason why we can't have an great opportunity to win every game on that schedule, and win our bowl game and win our conference, and then who knows," Fine said. "And then obviously after that, I'm going to continue to try to play football as long as I can."

The Mean Green are favored again in the C-USA West, after they came up short last season with three league losses by a combined 13 points before Fine suffered a hamstring injury early in a 52-13 New Mexico Bowl loss to Utah State. UNT won the division in 2017 before a 41-17 loss to FAU in the league championship game.

Fine began his first camp way down on the depth chart — maybe sixth or seventh behind the transfer quarterback who did start the first game of the 2016 season. But Fine got into the opener as a true freshman, and has been UNT's starter since taking that role his second game.

He was all the way up to about 156 pounds by the third game at 23rd-ranked Florida, a 32-0 loss. He was only 6-of-22 passing for 66 yards while getting sacked seven times, but that game showed the young quarterback he could be tough and play on that level.

"I learned a lot, and it was a great experience to say I played at The Swamp," he said. "Now I wish I was more of a junior than a freshman, I think we could have put up more yards and points. But I think it really helped me grow as a player, knowing that it was fast, but knowing I could take a hit from those first-round draft picks."

Fine threw for 4,052 yards and 31 touchdowns as a sophomore and followed that with 3,793 yards and 27 TDs last year, which included a scar on the bottom of his left (non-throwing) hand for a deep gash he got stitched up before returning to a game last November. Those are the top two passing yardage seasons in UNT history.

"He's a dynamic athlete that just creates plays, even when the plays aren't there," UTSA coach Frank Wilson said. "That's where he's a cut above, because it's one thing to plan for someone schematically, but his improv, what he's able to do when the play is covered. ... He has moxie, because he's a tough player."