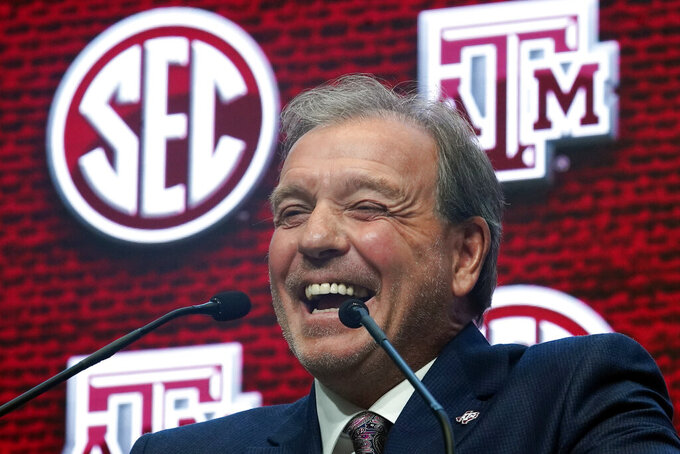 ATLANTA (AP) — Auburn coach Bryan Harsin took on what he called “the gorilla in the room” when he stood behind the podium at the Southeastern Conference Media Days on Thursday.

Following an offseason of uncertainty that threatened his job status, Harsin insists there is more unity than ever on his Auburn team.

Harsin said an inquiry into his program following his 6-7 debut as coach “was uncomfortable. It was unfounded. It presented an opportunity for people to personally attack me, my family, and also our program. And it didn’t work.”

A group of players, including defensive end Derick Hall, talked with Gogue and Auburn trustees in support of Harsin.

Auburn lost its final five games last season, leaving Harsin on the hot seat for 2022. He said he enters the season emboldened by what he described as “a silver lining in all of this.”

Texas A&M coach Jimbo Fisher had no update on the status of senior wide receiver Ainias Smith, who was arrested early Wednesday on charges of driving while intoxicated, unlawful carrying of a weapon and possession of less than 2 ounces of marijuana.

Smith had been listed as one of three Texas A&M players scheduled to attend the SEC Media Days. Instead, two Aggies — safety Demani Richardson and left guard Layden Robinson — represented the school.

Smith was suspended following the arrest, per athletic department policy. Fisher said he couldn't comment on Smith's chances of returning for the season.

“We’re gathering all the evidence and the things going on,” Fisher said. “We have no comment at this time.”

Robinson said he wasn't worried about the effect of the arrest on team chemistry so close to the season.

Smith, 21, was arrested by Texas A&M police and was booked into the Brazos County jail. He posted $8,000 bond and was released later Wednesday, according to jail records.

NO ONE TO BLAME

Texas A&M transfer Zach Calzada is a leading contender to win Auburn's quarterback job that was left vacant following the transfer of Bo Nix to Oregon.

Calzada was slowed in spring practice by a shoulder injury. He suffered the injury in Texas A&M's 20-3 win over the Tigers last season.

“We appreciate his leadership,” Harsin said. "We appreciate just his work ethic. He has experience. He’s played. The only unfortunate thing is we didn’t get a chance to have him in spring because of his shoulder going through all the team periods because we hurt him during the season.

“It’s one of those that you go back and look on it, you’re like, damn, I wish that hadn’t have happened. But he’s with us now and he’s getting his opportunities in the summer.”

Running back Tank Bigsby said Calzada provides toughness, leadership and “everything a quarterback is supposed to bring.”

“That dog,” Bigsby said. “You want to play with somebody that’s got that dog in him, who doesn’t back down.”

Calzada is competing with LSU transfer T.J. Finley, who started the final three games last season, for the starting job.