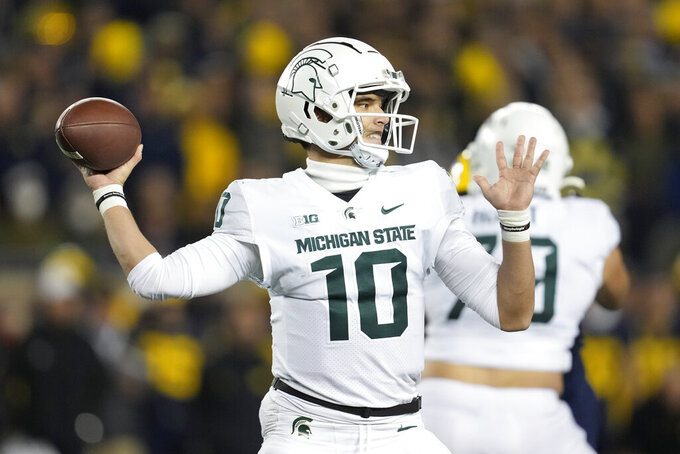 Line: Illinois by 17 1/2 points, according to FanDuel Sportsbook.

Illinois is within reach of its first-ever Big Ten West title after completing its first undefeated October since 2001. It has outscored its opponents 175-43 during a six-game winning streak. Michigan State arrives in Champaign fresh off a humiliating, 29-7 loss at rival Michigan, which steamrolled into a national storyline after Spartan players got into a postgame fight with Wolverine players in the Michigan Stadium tunnel.

Illini RB Chase Brown vs. the Spartans rush defense. National media is starting to catch onto Brown's breakout year after plenty of spotlighting from his coaching staff and athletic department. The Canadian product might be licking his chops thinking about this Spartan defense. The only Illinois opponent worse against the run than the No. 97 Michigan State defense (168.6 yards per game) is Nebraska (190.1 yards per game).

Michigan State: QB Payton Thorne. The fourth-year quarterback knows he has a big role to play in reviving a struggling offense, but also in holding together a struggling and controversy-riddled Spartans team. Thorne will need to improve his accuracy after completing 17-of-30 passes for 215 yards, a touchdown and an interception at Michigan, but he has solid options in wideouts in Keon Coleman (548 yards, six touchdowns) and fellow Naperville Central graduate Jayden Reed.

Illinois: CB Devon Witherspoon. Since the start of the season, Witherspoon has gone from being a respected Big Ten cornerback to consideration as an early round NFL Draft prospect. He limited star Nebraska receiver Trey Palmer to one yard on one catch last week.

Illinois is nearing a sellout and is expecting its largest crowd since a 2016 game against North Carolina drew 60,670 fans to Memorial Stadium. ... Michigan State has won 12 of 15 meetings, but Illinois has won the last two in 2016 and 2019. ... Tommy DeVito's 90.9% completion rate at Nebraska broke the Illinois record of 83.9% and also set a Cornhuskers stadium record. ... Former Illini TE Daniel Barker has 14 catches for 145 yards and one touchdown after transferring to Michigan State. Barker caught a late touchdown to lead the Illini to a dramatic win in East Lansing in 2019.