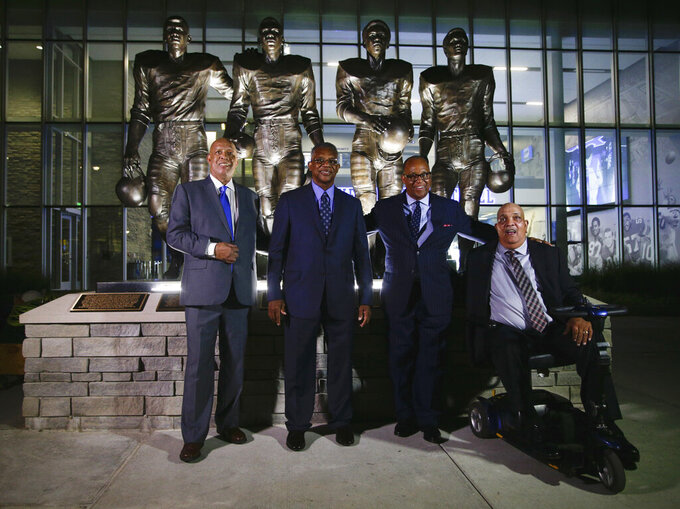 FILE - In this Sept. 22, 2016, file photo, from left, Mel Page, representing his brother Greg Page; Nate Northington; Wilbur Hackett; and Houston Hogg pose after statues of them were unveiled at the University of Kentucky in Lexington. Houston Hogg, one of four African-American football players at Kentucky who helped break the Southeastern Conference color line in the late 1960s, has died. He was 71. The school announced Friday, Jan. 3, 2020, that Hogg died in Owensboro, Kentucky. (Mark Cornelison/Lexington Herald-Leader via AP, File)

LEXINGTON, Ky. (AP) — Houston Hogg, one of four African-American football players at Kentucky who helped break the Southeastern Conference color line in the late 1960s, has died. He was 71.

The school announced Friday that Hogg died in Owensboro, Kentucky.

The former Wildcats running back and defensive back entered Kentucky with Wilbur Hackett in 1967, a year after Nate Northington and Greg Page arrived in Lexington to become the first black players to enroll at an SEC school. Hogg played freshman football that season, when Northington made his historic varsity debut for the Wildcats on Sept. 23, 1967, and played his first SEC game a week later against Mississippi. Northington's SEC debut came a day after Page died from a neck injury sustained in practice that summer.

Hogg rushed 92 times for 245 yards two touchdowns in his career and lettered in 1969 and 1970. He and his three teammates were honored for their groundbreaking courage and achievements in September 2016 with a statue outside the Wildcats' training facility.

Hogg, of Hazard, Kentucky, played at Daviess County High School in Owensboro. The Wildcats' 2019 season opener against Toledo was designated Houston Hogg Day and he served as honorary team captain.

Kentucky athletic director Mitch Barnhart said in the release that Hogg's contributions “go well beyond the football field” and “his pioneering legacy will live on for generations.”

He praised his work with foster children “for whom he gave exceptional care.”