Huskers to be without injured QB Martinez versus No. 17 Iowa 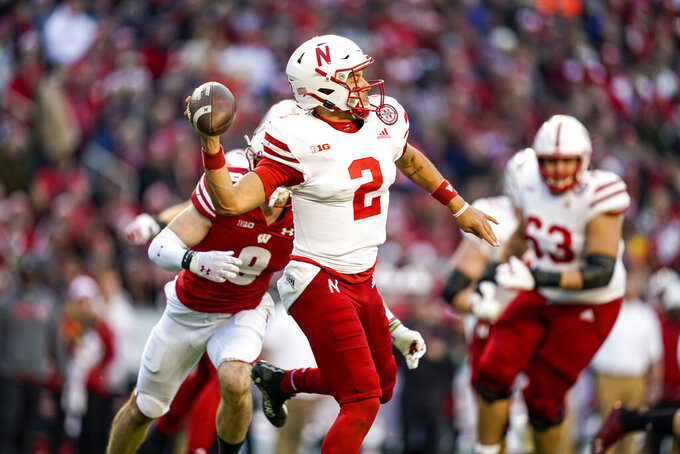 Martinez's right (throwing) shoulder was hurt in the first half against Wisconsin on Saturday when he was hit by a defender as he threw a pass in the first half. He was able to finish the game.

Frost said the extent of the injury wasn't known until Martinez had a more thorough examination once the team returned to Lincoln. Martinez reported hearing clicking in the shoulder and told the staff he didn't think he would be able to throw with enough velocity to be effective, Frost said.

Martinez has played through numerous injuries in his four years as the starter for the Cornhuskers (3-8, 1-7), including a broken jaw he sustained in September.

“He’s such a tough kid,” Frost said. “I didn’t expect him to play in the second half and he came up to me right before the second half kickoff and said he wanted to go. He played well, played tough. I feel terrible for him, but appreciate him, and we’re going to have to be without him Friday.”

Martinez would be eligible to return for a fifth season because the NCAA is allowing an extra year of eligibility due to the pandemic. Martinez has not announced if he'll return, enter the transfer portal or pursue other opportunities outside football.

Martinez has been prolific statistically, but his big numbers haven't translated into many wins. Martinez set the Nebraska record for career total offense in the 35-28 loss at Wisconsin, and he averaged 308 yards per game this season, well ahead of the school record he set in 2018.

Martinez went into 2019 getting mention as a Heisman Trophy candidate, but he never built on his impressive freshman season. Throughout his career he's been prone to fumbling and throwing interceptions and is just 15-23 as the starter.

“He’s done a ton of really good things at the University of Nebraska,” Frost said. “Sometimes it’s been great, sometimes it hasn’t. But I admire and respect him, and he and I’ve been battling through a lot together, and I just appreciate who he is.”