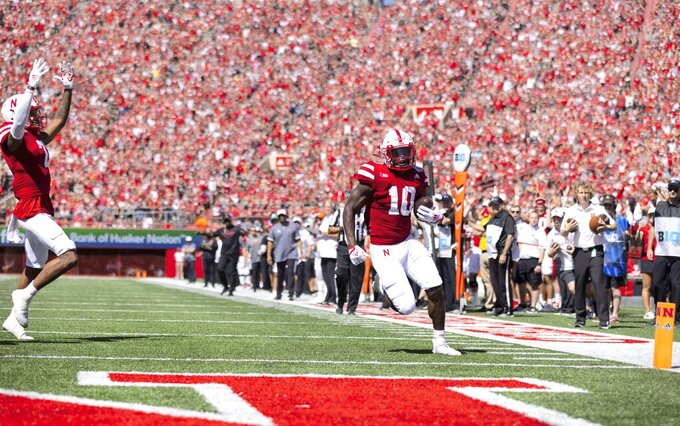 Nebraska's Anthony Grant (10) runs in a touchdown as Marcus Washington (7) celebrates nearby during the first half against North Dakota in an NCAA college football game Saturday, Sept. 3, 2022, in Lincoln, Neb. (AP Photo/Rebecca S. Gratz) 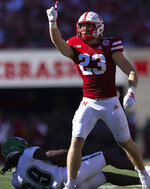 LINCOLN, Neb. (AP) — Nebraska's tussle with North Dakota into the fourth quarter Saturday surely won't turn down the heat on Scott Frost, but the Cornhuskers' coach said his team can build off the 38-17 victory.

Anthony Grant ran for 189 yards and two touchdowns, with the second one breaking a tie late in the third quarter and helping Nebraska shake loose from its opponent from the Football Championship Subdivision.

The Cornhuskers (1-1) bounced back from their loss to Northwestern in Ireland last week and ended a seven-game losing streak with their first win since Oct. 2.

“In some ways I thought we made some big strides from last week, but there's still a lot to fix,” coach Scott Frost said. “The team did a great job of keeping its composure, but it was way closer than we wanted. ... I think the team is in a great place because they're confident and they see the talent but they know, hey, we can be a lot better than we were today."

Nebraska scored on its opening possession for a second straight week but not again until the third quarter. Boos rained down on the Huskers as they jogged off the field at half tied at 7.

“Everybody needs to relax and breathe,” edge rusher and co-captain Garrett Nelson said he told his teammates in the locker room. “We just needed to do our jobs and what we've been trained to do.”

Casey Thompson's 19-yard pass to Nate Boerkircher and Timmy Bleekrode's 46-yard field goal put the Huskers up 17-7 in the middle of the third quarter. But the Fighting Hawks (0-1) scored twice in just under four minutes to tie it again.

Isaiah Smith broke a 63-yard run to the Nebraska 6 before Brady Stevens kicked a 23-yard field goal. The Hawks got the ball right back on Wyatt Pedigo's interception, and Tyler Hoosman scored two plays later from the 3.

Thompson then drove the Huskers 75 yards in five plays, with Grant breaking a 46-yard run to give them the lead for good. The Huskers scored two touchdowns in the last six minutes to put away the Hawks.

The Hawks punted on their first four possessions before going 80 yards in 16 plays to tie it 7-7 at half. Tommy Schuster converted a third-and-12 and a fourth-and-1 before flipping a 1-yard touchdown pass to Adam Zavalney just before half.

“I was really pleased with how we were playing, scoring before half, then getting down 10 and Wyatt made a nice play to get a turnover and we were able to run it in and now we’re in a game down the stretch,” UND coach Bubba Schweigert said. “I was pleased with our effort and our want-to.”

North Dakota: The Hawks dropped to 1-11 against FBS opponents but hung with the Huskers into the fourth quarter and showed resilience by coming back from a 10-point deficit to tie it. Smith, who had 104 yards on 10 carries, limped off the field late in the third quarter and didn't return.

Nebraska: The Huskers improved to 14-0 against FCS opponents but didn't do much to alleviate the fans' concerns. They got all they could handle from the Hawks for three quarters and moved the ball against a tiring defense late.

NO CROWN FOR GRANT

Grant appears to have strengthened his grip on the No. 1 running back's job. Frost hesitated to lavish him with praise, noting Nebraska fans' tendency to get overly excited about players who show promise early in their careers.

“I don't want to crown him yet,” Frost said. “I know how Nebraska is. There's no need to clear space to retire his number yet, but he had a good day.”

NOT ANOTHER ONSIDE KICK

A week after Frost was pilloried for the ill-advised onside kick he dialed up with an 11-point lead against Northwestern, it almost looked like he called for another one when a personal foul led to the Huskers kickoff off from the 50 after taking a 24-17 lead.

Brendan Franke grounded the ball about 15 yards and North Dakota recovered, and then came the boos. Frost said the plan was for a squib kick, but he ball hit a Hawks player and didn't make it downfield.