Illinois seeks win over Northwestern plus help to win West 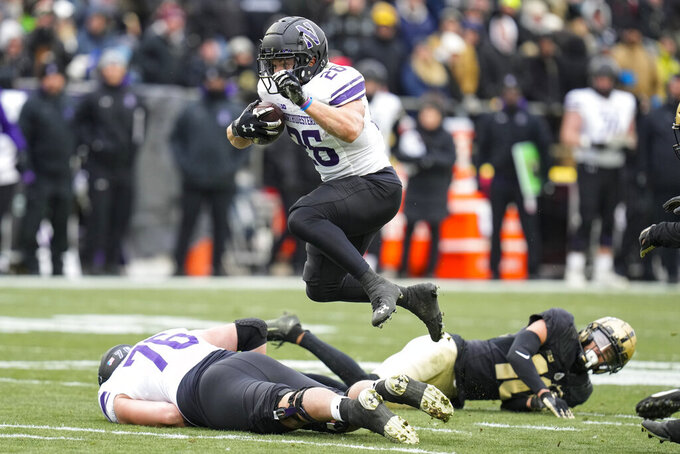 Northwestern running back Evan Hull (26) leaps for a gain as he runs against Purdue during the second half of an NCAA college football game in West Lafayette, Ind., Saturday, Nov. 19, 2022. Purdue defeated Northwestern 17-9. (AP Photo/Michael Conroy)

Illinois needs a win and some help to capture the Big Ten West title and play in the conference championship game for the first time. It will take a victory over Northwestern plus losses by Iowa to Nebraska and Purdue to Indiana. Illinois lost 19-17 at No. 3 Michigan last week when Jake Moody made a 35-yard field goal for the Wolverines with nine seconds left and has dropped three in a row after winning six straight. Northwestern's win was over Nebraska in the season opener in Ireland. The Wildcats are on their worst skid since going 0-11 in 1989, their most recent double-digit-loss season.

Illinois RB Chase Brown vs. Northwestern's run defense. Brown leads the nation in yards rushing with 1,582 and has a chance to break Mikel Leshoure's single-season school record of 1,697 in 2010. Brown ran for 140 yards and two touchdowns last week against one of the nation's best defenses. Northwestern ranks among the worst in the nation against the run at 194.5 yards per game.

Illinois: QB Tommy DeVito. The Syracuse transfer has played a big role in the offense's improvement, with a 70% completion percentage that ranks third in the nation. With a 143.7 passer rating, he is on pace to break the Illinois record of 141.6 set by Wes Lunt in 2014.

Northwestern: RB Evan Hull. Hull has five games this season and 11 over four years with at least 100 yards rushing, after going for 105 against Purdue last week. Hull figures to be challenged by a defense that ranks second in the nation overall and seventh against the run.

Illinois has its highest win total since the 2011 team went 7-6. The Illini haven't won eight or more since the 2007 Rose Bowl team finished 9-4. ... Illinois has not finished with a winning conference record since a 6-2 mark in 2007. ... The Illini are tied for second in the nation with 17 interceptions — one behind USC. ... DBs Kendall Smith and Sydney Brown are tied for 12th in the nation and second in the Big Ten with four interceptions. Illinois is the only team in the nation with two players with at least four interceptions. ... Northwestern has dropped 16 of 17, including a loss at Illinois a year ago. ... Coach Pat Fitzgerald is 110-100 in 17 seasons with his alma mater.