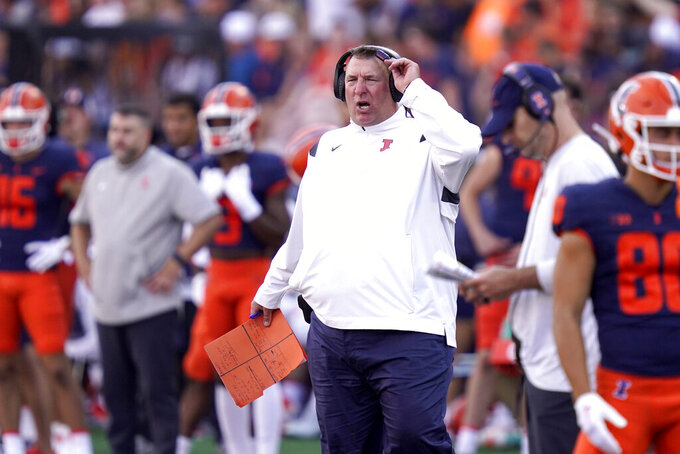 Line: Indiana by 2 1/2, according to FanDuel Sportsbook.

Illinois coach Bret Bielema wanted a nonconference game before opening Big Ten play. Athletic department officials obliged, and the Illini beat Wyoming convincingly last week. Bielema now hopes the expected improvement between the first two games comes to fruition. Indiana, meanwhile, opens against a conference opponent for the fourth time in six years. The last time the Hoosiers won their opener, in the 2020 pandemic season, they went 6-2. This time they're trying to snap a nine-game losing streak in league play.

Indiana QB vs. Illinois secondary. Hoosiers coach Tom Allen hasn't announced whether Jack Tuttle or Missouri transfer Connor Bazelak will start. Either way, the challenge will be facing what appears to be an improved Illinois defense. A year ago, the Illini allowed 215.2 yards passing per game. But they yielded only 30 yards last week for their lowest single-game total since 2012. The Cowboys also converted just one of 12 third downs.

Illinois: RB Chase Brown. After topping the 1,000-yard mark last season, Brown opened 2022 with a bang. His 151 yards rushing rank fourth in the nation and his three touchdowns — two on runs, one on a catch — are tied for the national lead. Friday's game should give everyone a better glimpse of what Brown could do for the Illini this season.

Indiana: CB Tiawan Mullen. While most fans have been fixated on the quarterback battle, the return of a healthy, All-America-caliber cover corner could give the Hoosiers' defense a huge lift. An injury in practice limited Mullen to only four starts and seven game appearances last season. It showed. The Hoosiers' defense struggled mightily without him.

Illinois and Indiana are squaring off for just the second time since 2013. ... The Illini have held five of their last six opponents to 20 points or fewer. ... Indiana lost its final eight games in 2021 but has won three straight in the series. ... Illinois QB Tommy DeVito will make his conference debut just six days after going 27 of 37 with 194 yards and two TDs in his first game since transferring from Syracuse. ... Allen, who was initially hired by Indiana to be the defensive coordinator, has resumed calling the defensive signals. ... Illini receiver Jonah Morris attended Indiana in 2016 and 2017.