King of the North? No. 12 Oregon visits No. 25 Washington 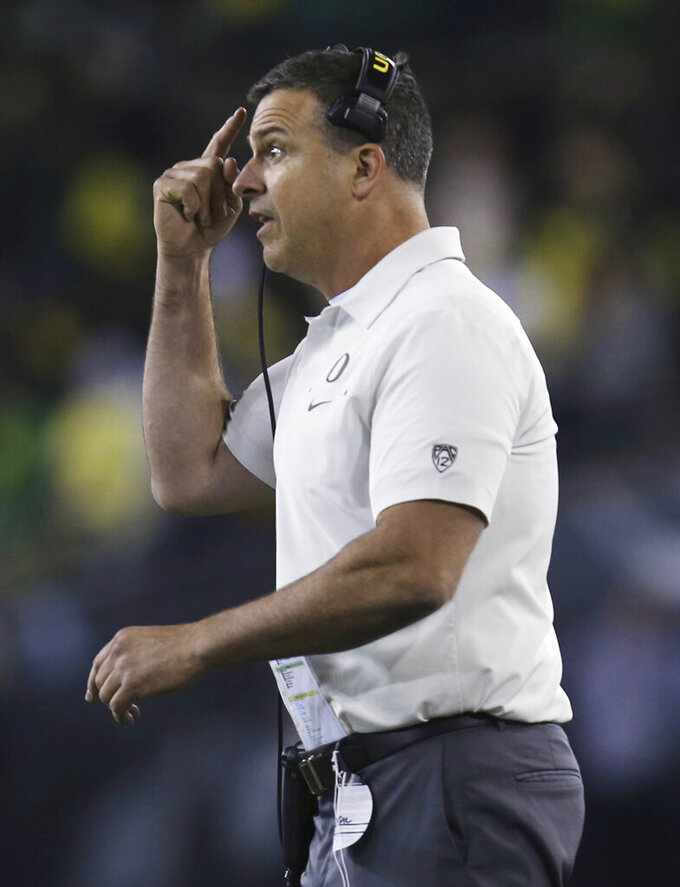 SEATTLE (AP) — A year ago, Jacob Eason sat on his couch in Seattle and watched on television as a sea of yellow and green enveloped the field at Autzen Stadium after Oregon got the better of its northern neighbors.

Eason couldn't do anything that day other than watch since he was sitting out a year after transferring from Georgia. Washington's quarterback will have a direct influence this time in preventing another Ducks party from breaking out.

"I saw what it meant to this team last year, I saw how much the fans are involved in it, it's an awesome big game and big deal to be a part of," Eason said.

No. 12 Oregon can potentially put the Pac-12 North race to bed with another victory this year over No. 25 Washington. The Ducks (5-1, 3-0 Pac-12) are in complete control of the division race at the midpoint of the season and a win Saturday over the Huskies (5-2, 2-2) would make it very difficult for anyone to chase Oregon down.

Every other team in the North already has at least two losses and the Ducks would hold tiebreakers over Washington and California, with a game still to come against rival Oregon State at the end of the season.

Oregon hasn't completed its ascension back to the top of the Pac-12 North but it's on the cusp.

What's different about this revitalized Oregon season is that the defense is leading the way. The Ducks have held five straight opponents to single-digit points. They've allowed just one touchdown in the past five games, a span of 63 offensive drives by their opponents. In 14 red-zone trips by opponents all season, Oregon has surrendered two touchdowns.

It's a remarkable run on defense and one rarely associated with the Ducks.

"You're not going to get them or trick them," Washington coach Chris Petersen said. "Wideouts have to go make plays. Running backs have to break tackles, going to have to have great ball security. (Offensive) line is going to have to do a great job. They just play well as a unit."

In other years, the focus would be on the quarterback matchup between Oregon's Justin Herbert and Eason. They each appear to have futures as NFL quarterbacks, and while both are playing well this season, they've frankly been in the background.

For Herbert, it's been because the Ducks have played so well on defense.

For Eason, it's been because Washington's offense had sputtered for weeks before breaking out last week at Arizona with 38 points in the second half of the 51-27 victory. Eason is normally quiet by nature but gave an impassioned halftime speech to help spark the Huskies.

"When guys don't talk a lot and then they finally do talk, I think people no matter what they say are going to listen just because it means more," Washington left tackle Trey Adams said.

Here are other things to watch as the Huskies and Ducks meet for the 112th time.

Oregon was dealt a big blow when leading receiver Jacob Breeland was lost for the season to a leg injury suffered last week against Colorado. Breeland was a security blanket for Herbert. His loss will put extra focus on wide receivers Jaylon Redd and Johnny Johnson III, among others. Redd, Johnson and Breeland are the only Oregon players with double-digit receptions this season.

Washington also has a big question mark on the offensive line with uncertainty about center Nick Harris after he missed last week's win over Arizona.

If the Huskies are going to find success against the Ducks, running backs Salvon Ahmed and Sean McGrew need to have big games. That won't be easy against an Oregon defense that is giving up just 107 rushing yards per game, 3.1 yards per carry and has allowed only one rushing touchdown. McGrew and Ahmed combined for 201 yards and three touchdowns in the win over Arizona.

Hebert has thrown a touchdown pass in 34 consecutive games, the longest active streak in the country. He has 17 TD tosses and one interception on the season. He's completing 69% of his passes, a 10-point jump from a year ago. Herbert has played well on the road in his career, but his team hasn't had much success. In 12 career Pac-12 road games, Herbert has 26 touchdowns and two interceptions, but the Ducks are just 4-8 in those games.

Washington kicker Peyton Henry missed a 37-yard field goal at the end of regulation last year that would have beaten the Ducks. Instead of dwelling on that major miss, Henry has been nearly perfect since. Henry made 7 of 8 field goal attempts last year after the miss against Oregon and is a perfect 14 of 14 to start this season. Henry is one of nine kickers in the country who are still perfect on field goal attempts this season.