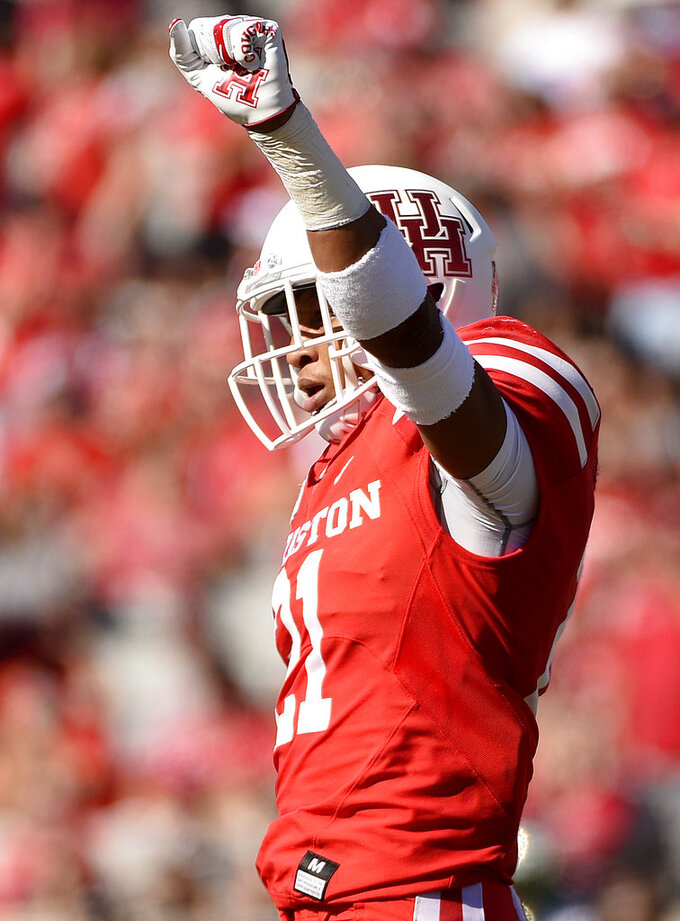 Houston defensive back Gleson Sprewell signals fourth down during the first half of an NCAA college football game against South Florida, Saturday, Oct. 27, 2018, in Houston. (AP Photo/Eric Christian Smith) 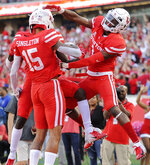 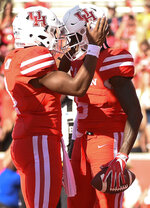 HOUSTON (AP) — Houston coach Major Applewhite said quarterback D'Eriq King was everything the Cougars thought he could be and more.

King had a hand in a career-high seven touchdowns, throwing for 419 yards and five scores and running for 134 yards and two more touchdowns in Houston's 57-36 victory over No. 21 South Florida.

"If you don't have a tough quarterback, you're going to struggle as a football team, and he's very tough," Applewhite said. "He's one of the best competitors, if not the best competitor, that I've ever been around. He plays his butt off. I mean, he jumps over people, he tries to run through people. He does whatever he needs to do."

Marquez Stevenson caught six passes for 106 yards and two touchdowns, Jeremy Singleton had five receptions for 125 yards and a touchdown and Courtney Lark caught four passes for 85 yards before exiting early in the fourth quarter with an injury. Houston (7-1, 4-0 American) won its fifth straight, totaling a season-high 684 yards of offense.

"When you lose a game the way we just lost, it was just totally embarrassing," USF coach Charlie Strong said. "We are a better football team than we showed today. You can't give up five touchdown throws."

After a safety on King for intentional grounding in the end zone, USF cut the lead to 28-26 on a 23-yard field goal by Coby Weiss with 10:47 remaining in the third quarter, but the Bulls would not get any closer.

"Offensively, for the most part, we played our most complete game besides the turnovers and the two field goals," Barnett said. "If we were more efficient in the red zone, that would have helped us a lot."

King responded by breaking four tackles up the middle, spinning out of the final tackle, on a 4th and 7 for the 36-yard touchdown run to give Houston a 35-26 lead with 8:25 remaining in the third.

"The whole time in my head I'm thinking, 'Man, I've got to make a play right here,'" King said. "The offensive line made some great blocks, and I just made a couple of guys miss, and the rest is history."

After USF cut the lead to six with a field goal, King hit Jeremy Singleton for a 52-yard touchdown pass before converting on a two-point conversion pass from Bryson Smith to Singleton to up the lead to 43-29 with 2:43 left in the third.

USF cut the lead in half with a 39-yard touchdown pass from Barnett to Deangelo Antoine with 36 seconds left in the third, but Mulbah Car rushed for an 11-yard touchdown a minute into the fourth to up the lead back to 14.

King found Raelon Singleton for a 27-yard touchdown pass with eight minutes left to up the lead to 21.

"When you play on the road and play a really good football team, you have to get turnovers and you can't turn the ball over," Strong said. "It's hard to match scores and it's hard to just play catch up, and that's all we did."

Houston: The Cougars' offense led by King was able to beat USF both in the air and on the ground. Houston had six rushers total 265 yards. The defense forced two fourth quarter turnovers to seal the win.

Houston All-American defensive tackle Ed Oliver missed the first game of his career Saturday with a bruised right knee. Oliver, who has 51 tackles, 13 1/2 tackles for loss and three sacks this season, saw his streak of 32 straight starts end. Applewhite said there was no decision on whether Oliver would play next week.

"We all love Ed, and we want Ed to play, but I thought this was a huge win for our team from a morale standpoint, a confidence standpoint," Applewhite said.

With the loss, South Florida will likely drop out of the Top 25. Houston, which received votes in the poll this week, should receive more votes and could possibly sneak in.

Houston: At SMU on Saturday.