The Latest: Florida athletics seeing a rise in COVID cases 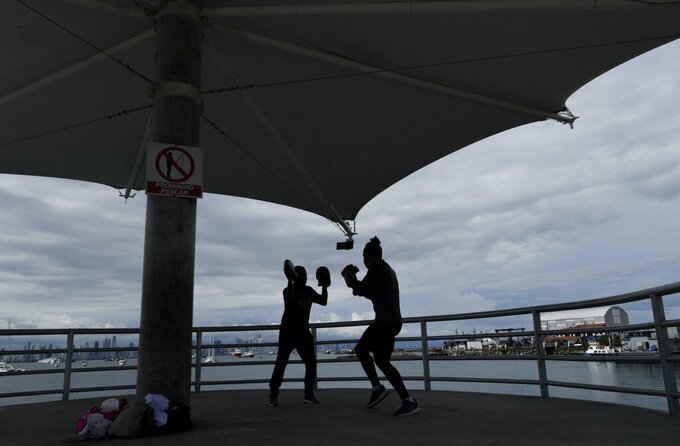 Cuban boxer Yunier Menen, right, and his trainer Carlos Agrazal train at the Amador causeway amid the COVID-19 pandemic in Panama City, Monday, Sept. 14, 2020. Panama lifted a months-old coronavirus measure on Monday that restricted women to going out one day, and men the next. (AP Photo/Arnulfo Franco)

Florida’s athletic department is seeing a rise in COVID-19 cases.

The school reported 61 new positive cases Tuesday, including six for the football team a little more than a week before its season opener at Ole Miss. The spike in infections coincided with the return of student to campus and the start of classes.

The Gators ceased activities with the school’s lacrosse and baseball programs due to dozens of positive results. Lacrosse reported 31 coronavirus cases, and baseball had 15.

The women’s soccer team had three cases, leading to the cancellation of Saturday’s season opener at Missouri. Multiple players were quarantined because of contact tracing with infected teammates.

Football coach Dan Mullen said Monday he was pleased with how his players have avoided exposure to the virus. The team had 21 positive cases once players returned to campus in late May, but it didn’t have a single positive in August.

Mullen credited his players. He said anytime 50,000 students are on campus “you’re going to have a spike. Our guys, we have a minor one.”

The Georgia Bulldogs will not allow tailgating on campus for football games this season because of the coronavirus pandemic.

The No. 4 Bulldogs open the season at Arkansas on Sept. 26. The first of four home games at Sanford Stadium is a prime-time contest against No. 8 Auburn on Oct. 3.

Fans will be allowed to gather near their vehicle with family members or those they traveled with to Sanford Stadium. Parking lots on campus will open three hours before kickoff for each home game. Attendants will require that all occupants in the vehicle have tickets for the game.

Georgia Tech has banned tailgating on campus for Saturday’s home opener against No. 14 Central Florida.

The school is holding off on making a decision about tailgating for its remaining five games at Bobby Dodd Stadium.

Athletic director Todd Stansbury says it was “not a decision that was made lightly” but the feeling is that the safest course of action is to invite fans to come straight from their vehicles to Bobby Dodd Stadium to ”better safeguard the health and safety of our students, staff and visitors through the protocols that we have in place designed to mitigate the risk of the transmission of COVID-19.”

Chairs, grills and coolers will not be permitted outside of an individual’s vehicle or recreational vehicle, and no loitering or gatherings of any size will be permitted in campus areas before the game.

Keeneland will hold next month’s 12-day fall meet without spectators because of the coronavirus pandemic but will allow a limited number of participants and essential personnel.

The Lexington, Kentucky, track had a similar policy for a special five-day summer meet after canceling its spring card. Keeneland will conduct the season-ending Breeders’ Cup World Championships Nov. 6-7 without spectators.

Keeneland President/CEO Bill Thomason said in a release the decision was made after consulting local and state government officials and public health experts, and monitoring worldwide sporting events during the pandemic.

The first-place Atlanta Braves have laid off an unspecified number of employees throughout their organization because of the economic hit caused by the coronavirus pandemic.

Furloughs and cuts have been widespread throughout baseball since the league suspended operations in March. The season finally started in July with a shortened 60-game schedule, but no fans are allowed to attend.

After USA Today’s Bob Nightengale reported the layoffs, which he said included several of the Braves’ top pro scouts, the team issued a statement confirming that is has “completed a re-organization of full-time staff, spread across all areas of the organization including our baseball, business, real estate development and minor league operations.”

The team’s announcement comes less than two weeks before the start of the baseball playoffs. The Braves are in position to capture their third straight NL East title and host a first-round series at Truist Park.

Arkansas State’s home football game against Central Arkansas has been pushed back from Saturday to Oct. 10.

The school made the announcement in a news release Tuesday.

Arkansas State said it cannot assemble a full two-deep depth chart at a specific position group due to player unavailability. The statement did not say if the postponement was COVID-19 related, but said the “health and safety of our student-athletes will always come first.”

“We are obviously disappointed for the student-athletes participating from both schools, as well as both coaching staffs and fan bases,” Arkansas State athletic director Terry Mohajir said.

All tickets purchased will be honored on the new date.

“We will remain diligent in our health and safety protocols, and we look forward to resuming our 2020 schedule next week against Tulsa,” Mohajir said.