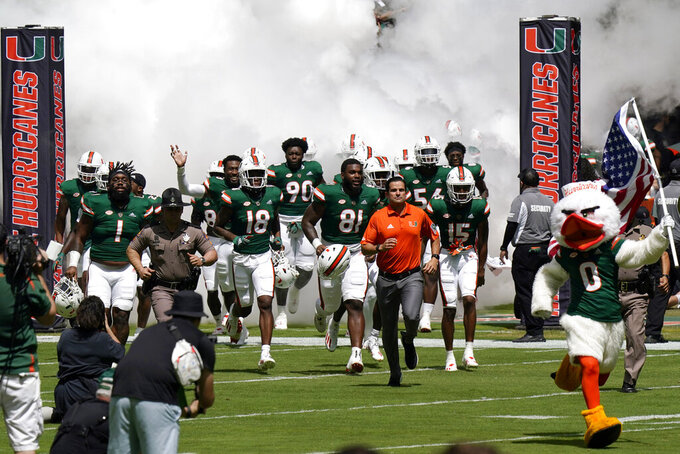 MIAMI GARDENS, Fla. (AP) — D'Eriq King was watching from the sideline, and his backups put on a show.

Tyler Van Dyke passed for 270 yards and three touchdowns in his first career start, and Miami tuned up for Atlantic Coast Conference play by racking up a school-record 739 yards of offense in an easy 69-0 win over Central Connecticut State on Saturday.

Van Dyke — starting in place of King, out with a shoulder injury — became the first Miami quarterback since Brock Berlin in 2003 to throw a touchdown pass on the first possession of his first start. He finished 10-of-11 passing.

Van Dyke shared time with Jake Garcia, who completed 11 of 14 passes for 147 yards and two touchdowns in his collegiate debut.

Miami (2-2) had eight players had either a scoring run or catch and the Hurricanes scored touchdowns on their first seven possessions. The 69 points was the fifth-most in school history, and the margin of victory was the third-largest behind only 77-0 and 77-7 wins over Savannah State in 2018 and 2013, respectively.

“Both Tyler and myself were preparing like the starters throughout the week leading up to this," Garcia said. “Now, it's our turn. We kind of had an idea we would be playing early on in the week and went out there prepared."

Cam’Ron Harris had 10 carries for 100 yards and two touchdowns for Miami, while Thad Franklin had 88 rushing yards and a score.

Cody Brown rushed for 77 yards on 14 carries and two more touchdowns for Miami. The Hurricanes’ previous record for total yards was 689 against UCLA on Dec. 5, 1998.

“I gained a lot of confidence, even though it was an overmatched opponent," Van Dyke said.

Romelo Williams, whose hometown of Miramar, Florida is just a few minutes away from Hard Rock Stadium, completed 15 of 28 passes for 132 yards for Central Connecticut State (1-3). The Blue Devils missed a 30-yard field goal try with 4:58 remaining, which was their last chance of avoiding the shutout.

“We knew coming into it that we were going to be a little bit outmanned, and we certainly were," CCSU coach Ryan McCarthy said. “We certainly learned a lot about us, who we are. We played hard until the end."

Central Connecticut State: The Blue Devils got $650,000 for this game, as well as a chance to play in an NFL stadium and against a different caliber of team than they usually see at the FCS level. It should serve as a learning experience.

Miami: The Hurricanes played without safety Gurvan Hall Jr., who served a one-game suspension for an unspecified violation of team rules. Running back Jaylan Knighton’s four-game suspension is now complete, meaning he may return for the Virginia game. But the status of injured players — King, offensive lineman Corey Gaynor and striker Amari Carter among them — remains unclear heading into the ACC slate.

Combined with Miami’s 48-0 win over Duke last season, the Hurricanes now have scored 117 unanswered points against teams with the nickname of Blue Devils. The Hurricanes face Duke on Nov. 27.

Proof that stats don’t always tell the whole story: CCSU’s Aidan Clark had a 3-yard punt in the first quarter, which looked bad on paper and instead was an outstanding play. The snap sailed way over his head, and Clark retreated about 20 yards to field the ball. He kicked it from his own 12, managing to send the ball about 45 yards downfield — but only 3 yards past what had been the line of scrimmage.