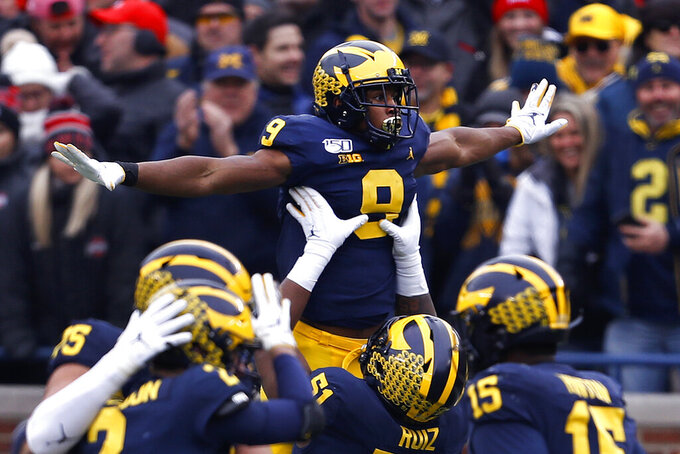 FILE - Michigan wide receiver Donovan Peoples-Jones (9) celebrates his 25-yard touchdown reception against Ohio State during the first half of an NCAA college football game in Ann Arbor, Mich., in this Saturday, Nov. 30, 2019, file photo. Michigan canceled its annual rivalry game at Ohio State on Tuesday, Dec. 8, 2020, because of the COVID-19 outbreak within the Wolverines football program.(AP Photo/Paul Sancya, File)

ANN ARBOR, Mich. (AP) — Citing a rising number of COVID-19 cases in its program, Michigan canceled its annual showdown with Ohio State on Tuesday as college football lurches toward the end of the season without one of its cornerstone rivalry games.

The season-ending grudge match known as “The Game” won't be played for the first time in 102 years.

Harbaugh said his players were “very disappointed” to not face the third-ranked Buckeyes, who would be heavily favored: "The odds were against us, but our players, to a man, wanted to have that opportunity.”

Michigan athletic director Warde Manuel said the spread of the coronavirus has not slowed since last week’s outbreak began and the team was not expected to be cleared to practice by the end of the week.

“The number of positive tests has continued to trend in an upward direction over the last seven days,” he said. "Unfortunately, we will not be able to field a team due to COVID-19 positives and the associated quarantining required of close contact individuals.”

Outbreaks have disrupted more than 110 games across major college football since August — including this weekend's regular-season finale between No. 7 Cincinnati and No. 18 Tulsa, which will instead look ahead to their matchup in the Dec. 19 American Athletic Conference title game.

NCAA President Mark Emmert, in an interview with AP on Tuesday, said even with all the disruptions more than 80% of the games are likely to be played and the football season should still be considered a success. Along with the volleyball and soccer seasons.

“If you’re just looking at college football, how can you have a successful football season without Ohio State-Michigan. I mean, that seems crazy, right?" Emmert said. “But on the other hand, the success was despite all of the pressures to have that game, they said no. The health of our people is just too important. Our students and our staff, we’re not going to risk. So to me, that’s a success.”

The problems with the Wolverines were closely watched in part because the undefeated Buckeyes (5-0) have championship goals again this season.

With two games already canceled, the Buckeyes under current conference rules still need a sixth game to be eligible to play for a Big Ten championship Dec. 19 in Indianapolis against Northwestern.

“If we don’t quite get the games we need to get into the championship game, I think that needs to be looked at hard, just like anybody else in the conference,” Day said shortly before Michigan’s announcement.

“The Michigan-Ohio State rivalry is one of the most important rivalries in all of sports,” the Big Ten said in a statement. “The conference is committed to transparency and will continue to collaborate with its member institution stakeholders to determine Big Ten championship game participation requirements as well as tiebreakers.”

The league could decide Ohio State will still represent the East Division at least in part because the conference also doesn’t want to hurt the Buckeyes' chances of earning a playoff berth. Ohio State entered the day No. 4 in the CFP rankings.

Manuel said he didn’t think the Buckeyes, or any team, should be punished for not playing enough games during the pandemic and added that Ohio State is one of the top four teams in the country. He also said if Ohio State does not play for the conference championship, it would be “great” to play the rivalry game against Michigan on Dec. 19.

The Buckeyes played through what Day called a “mini outbreak” last Saturday in a 52-12 win at Michigan State as he watched the game from home. Day is among the coaches and players in the program who tested positive for the coronavirus, leading to Ohio State canceling a game at Illinois.

The Wolverines canceled last weekend’s game against Maryland because they had at least 12 positive COVID-19 cases within the football program, a person familiar with the situation told The Associated Press. That number had reached 16 by Tuesday, according to the person, who spoke on condition of anonymity because the size of the outbreak has not been disclosed by the school.

The cancellation spares Harbaugh and the Wolverines (2-4) what would likely be another lopsided loss.

The Buckeyes beat Michigan 56-27 at the Big House last year, extending their winning streak in the series to a school-record eight straight. Harbaugh fell to 0-5 in the rivalry, continuing a trend that has seen Michigan lose 15 of its last 16 games to Ohio State to knock some luster off one of the greatest rivalries in sports.

Harbaugh’s winless record as a coach in The Game is often scrutinized, especially this season with Michgan sputtering. Harbaugh, who is paid about $7 million per season, has one year left on his contract at the school he led as a quarterback in the mid-1980s.

The Game was first played in 1897 and became an annual contest in 1918. Michigan still leads the series 58-51-6, but the next showdown will have to wait. Ohio State defensive coordinator Kerry Coombs said the idea of not being able to play against Michigan made him “sick to my stomach.”

“There’s a lot of hatred that goes toward that (Michigan) logo,” he said. “All the stuff we have to do during the offseason, all the sit-ups and push-ups, everything, so there’s a lot of stuff that is definitely geared toward them.”