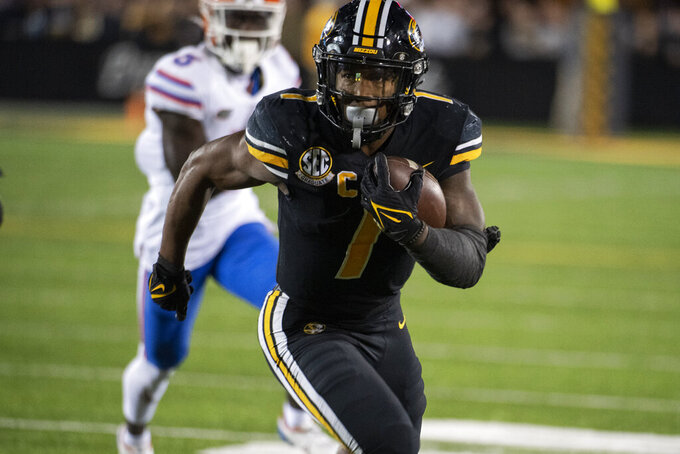 COLUMBIA, Mo. (AP) — Missouri quarterback Connor Bazelak heard boos from the home fans as he trotted to the sideline after fruitless drives Saturday. It was nothing but cheers after he lofted a 2-point conversion pass to Daniel Parker Jr. to lift the Tigers to a 24-23 overtime victory over Florida.

The Tigers (6-5, 3-4 Southeastern Conference) drew within a point on Tyler Badie’s 13-yard touchdown run, and Drinkwitz elected to go for 2 rather than send the game to a second overtime with a PAT kick.

Last week, Drinkwitz benched Bazelak for the last drive of a victory over South Carolina after he threw his second interception. Missouri fans sounded eager to see backup Brady Cook throughout Saturday’s game, but Drinkwitz stuck with Bazelak. The play-action action pass was designed to go to Badie in the right flat, but when he was covered and so was the second option, Bazelak turned to his left and released the pass to Parker just before getting hit.

“He showed a lot of grit and passion for the game,” Badie said of Bazelak. “He came out victorious, too. The last play, the ball was in his hand and he delivered for our team.”

Florida (5-6, 2-6 SEC) got the ball first in overtime, and Emory Jones caught a 6-yard touchdown pass from wide receiver Trent Whittemore on a trick play to give the Gators a brief lead. Jones completed 20 of 32 passes for 261 yards and a touchdown.

“That’s our seventh straight loss in one-possession games,” Florida coach Dan Mullen said. “That’s on us as coaches to create the mental toughness for the guys to make sure we have the right guys in the right position to make a play when the game’s on the line.”

Missouri entered the game with the nation’s 118th-ranked defense, and Florida had yielded 92 points in its last two games. No matter. The defenses dominated in a stingy battle of field position and field goals. Missouri led 9-6 at halftime on three Harrison Mevis field goals.

Florida finally broke the touchdown drought on its first drive of the second half. Jones hit Jacob Copeland on a 49-yard pass to set up a Dameon Pierce 2-yard scoring run. Missouri answered early in the fourth quarter when Bazelak connected with tight end Niko Hea for a 41-yard touchdown.

Missouri missed a chance to take the lead with 1:04 left in regulation when Mevis — who had made 17 of 18 field-goal attempts this season — pushed a 46-yarder wide right. Florida responded by running the ball three straight times and punted. Mullen said he called a draw on first down to take advantage of Missouri playing the pass, but when Nay’Quan Wright slipped in the backfield and lost 4 yards, he opted to run out the clock rather than throw the ball.

In overtime, Drinkwitz opted to put faith in his quarterback to win the game.

“Everybody has the right to their express their opinions,” Drinkwitz said, acknowledging the booing of Bazelak, who has thrown 10 interceptions this season. “These young men are playing as hard as they possibly can. They’re not perfect. None of us are. The No. 1 quarterback requirement is: Ignore the noise. You can have one of the worst games you ever had, but with two minutes left, you’ve got to be a rock and you’ve got to believe in yourself. Connor’s doing that.”

WHAT CAN’T HE DO?

Badie is the SEC’s leading rusher with 1,385 yards, and he’s not bad as a play-caller either. Drinkwitz said Badie suggested the call on a first-and-25 play that resulted in the touchdown pass to Hea. Badie was a decoy on the play.

Florida: With the Gators’ fourth straight SEC loss, the speculation about coach Dan Mullen’s job security will grow even louder. Florida is 2-9 in its last 11 games against Power 5 opponents. Mullen said he’s met with athletic director Scott Stricklin to discuss the future of the program.

“We had meetings last week about what direction we needed to go in the future with assistant coaches and who we’re going to bring in and who the candidates are and changes we need to look to make,” Mullen said.

Missouri: The Tigers secured bowl eligibility for the second time in Eli Drinkwitz’s two-year tenure as coach. Missouri had higher hopes than a six-win season, but after losing its first three SEC games, Drinkwitz deserves credit for keeping the team together and salvaging the season.

Florida: The Gators finish the regular season at home against Florida State on Nov. 27.

Missouri: The Tigers play at Arkansas on Friday in their regular-season finale.