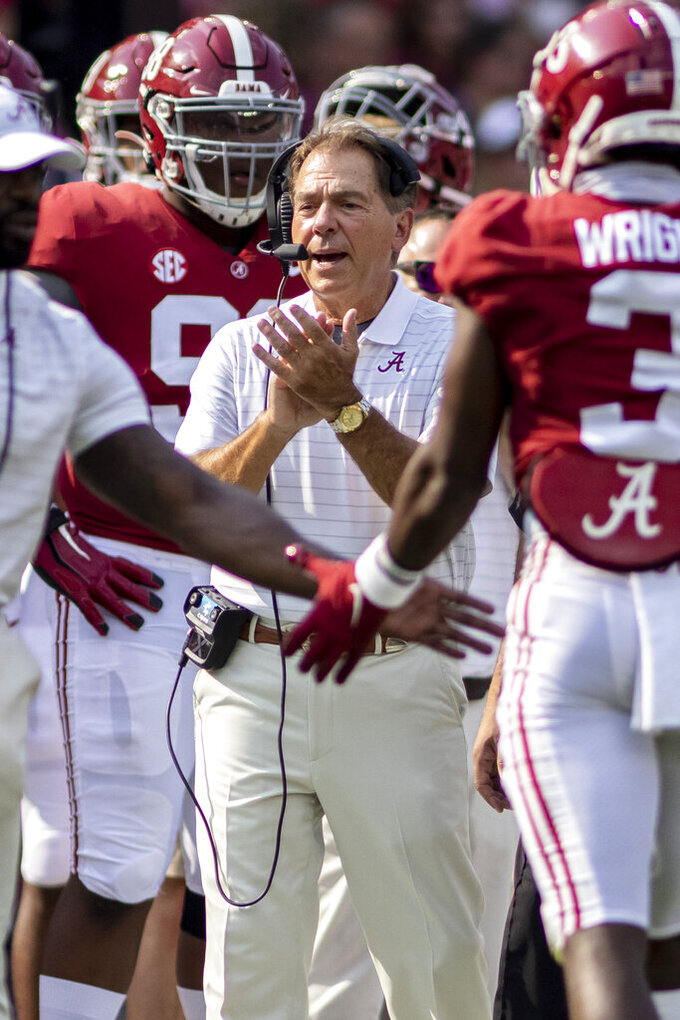 Alabama head coach Nick Saban cheers his team during the first half of an NCAA college football game against Mercer, Saturday, Sept. 11, 2021, in Tuscaloosa, Ala. (AP Photo/Vasha Hunt)

One blowout win into the season, Alabama coach Nick Saban was griping about the hype surrounding a team that had “basically played one half of one game.”

He’s still looking for that so-called complete game from the top-ranked Crimson Tide, which built a big lead and lost most of it in a 31-29 win over No. 11 Florida. In reality, it was the first real test Alabama has faced this season and it shouldn't be a surprise that the Gators didn't go quietly.

But “60 minutes” has been something of a mantra, especially early this season, for Saban & Co.

“I’ve heard it all my career here,” guard Emil Ekiyor Jr. said. “It’s something that Saban always emphasizes; it’s a part of the program, a part of the culture. The team knows that we have to do that and play to that standard.

“As far as the game, I feel like we did have some lulls in the game after we got up and a big lead, but we can’t look at the scoreboard, like Coach Saban says.”

Still, Alabama, which hosts Southern Miss Saturday night, has survived its in-game lulls while other top contenders like Clemson and Ohio State already have a loss and No. 4 Oklahoma eked out a win over Tulane.

— The Tide built a 27-0 lead in the first 23 minutes in the opener against then-No. 14 Miami. It never tightened up much but the Hurricanes did play Alabama nearly even the rest of the way in a 44-13 game.

— Against Mercer, the Tide’s first couple of drives went nowhere. Of course when the offense got going it was off to the races in a 48-14 win. Jase McClellan’s return of a blocked punt for a touchdown actually supplied the spark.

— Social media pundits were already writing off the Gators with Alabama’s dominating start at The Swamp. But a 21-3 first quarter lead evaporated and Will Reichard’s field goal in the fourth quarter ultimately proved the difference.

Perhaps it’s just the defending national champions finding something to harp on, but Saban has emphasized the need to maintain that focus for 60 minutes. He mentioned “60 minutes” seven times the previous two weeks in his news conferences.

“It’s a conscious decision that every player makes,” Saban said. “It comes down to, I’m feeling a little tired so I’m going to change the way I’m playing. Or you make the choices and decisions that I have to push through this and I’m going to train myself so that I can continue to do this even when the game comes.

“It really comes down to feelings versus making the right choices as a player.”

It could be a good sign for Alabama that players seem to be taking that 60-minute message to heart. The Gators wound up with 246 rushing yards against the Tide, who struggled to stop an attack featuring the passing and running threat of quarterback Emory Jones.

“I feel like defensively we haven’t played for 60 minutes yet,” Alabama linebacker Will Anderson Jr. said. “We haven’t played to the Alabama standard and that’s something that we’re trying to build on each week, especially coming off this week.