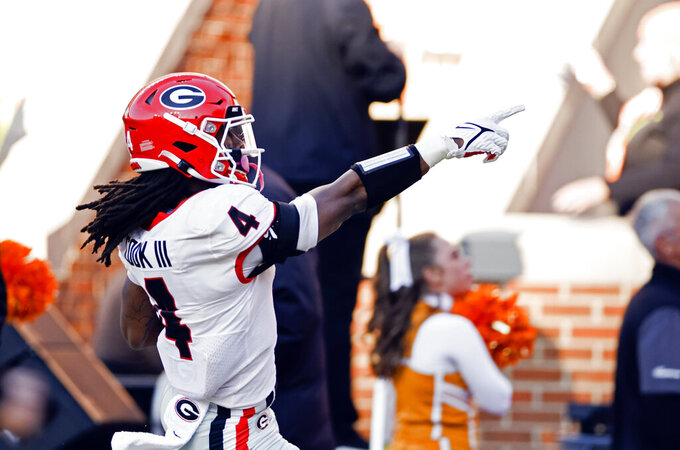 Georgia running back James Cook (4) points to fans as he scores a touchdown during the first half of an NCAA college football game against Tennessee, Saturday, Nov. 13, 2021, in Knoxville, Tenn. (AP Photo/Wade Payne)

ATHENS, Ga. (AP) — As the Southeastern Conference prepares to expand to 16 teams with the additions of Texas and Oklahoma, it may be more difficult for teams such as Georgia to find room on their schedules for such nonconference opponents as Charleston Southern.

Smart says such FCS programs like Charleston Southern, which plays at No. 1 Georgia on Saturday, are boosted by the payouts they receive and “need these games to survive.”

The game also is important to Georgia, which is looking to protect its national championship hopes.

Georgia (10-0) already has completed its Southeastern Conference schedule with a perfect 8-0 mark. The Bulldogs close their regular season with nonconference games against Charleston Southern (4-5) and Georgia Tech on Nov. 27 before playing in the SEC championship game in Atlanta on Dec. 5.

Smart said he has mixed feelings about scheduling FCS opponents. He says most fans prefer such high-profile nonconference matchups as Georgia's 10-3 season-opening win over Clemson.

It would have been more difficult to schedule Saturday's game if Georgia played nine SEC regular-season games, instead of eight.

“The league is going to get bigger," Smart said. “There’s going to be more games, and fans want the bigger games. Fans don’t usually want these games. It’s a pulling of two separate ways.”

Charleston Southern coach Autry Denson says the game is a “great opportunity” for his players and for the budget of his school's athletic department.

“It’s one of those deals where you don’t want to see those opportunities go away,” Denson told The Associated Press on Wednesday.

PLAYING TIME FOR ALL

This could be a week Georgia backups gain experience while Smart protects the health of his starters.

“I hope everybody gets to play, but I don’t control that,” he said. “... The hope is that we go out and play our best game.”

Stetson Bennett is expected to make his eighth start of the season for Georgia after passing and running for touchdowns in last week's 41-17 win at Tennessee. JT Daniels, who opened the season as the starter, could play behind Bennett.

Charleston Southern regularly plays before fewer than 4,000 fans in its home games. The Buccaneers' biggest crowd this season was 39,218 at East Carolina.

There should be more than 92,000 fans at Sanford Stadium on Saturday. Denson, the former Notre Dame running back, says he is not worried about how his players will react.

Besides, says Denson, “at the end of the day the fans can’t go on the field.”

Smart said Georgia had seven or eight players recovering from a flu virus, including some who became sick after the Tennessee game. He said some coaches also had the bug, though up to 85% of the team had been given the flu vaccine shot.

This may be the first of two senior days for some Georgia players.

The NCAA has granted an extra year of eligibility to student-athletes due to the coronavirus pandemic, so some seniors have the option to return in 2022. One of those players is Georgia quarterback Stetson Bennett, who is 7-0 as a starter this season.

Smart doesn't want to rush those decisions. He is encouraging players to participate in the pregame ceremony even if they ultimately return for another season.

“We’re going to honor those that choose to walk and a lot of them may decide to come back,” Smart said. “A lot of them have an extra year of eligibility, but we’re not crossing that bridge yet. So, we’re going to have them walk and then make the decision. If they walk twice, great, then they have a special opportunity.”

Smart said Wednesday he expects 28 to 30 seniors to be honored before the game, including 16 or 17 who are considering taking advantage of the extra year.

Charleston Southern is 0-24 all-time against FBS teams. They came close to the elusive win over a FBS team in a 31-28 loss at East Carolina on Sept. 25.