No. 11 LSU loses top pass rusher Chaisson for the season 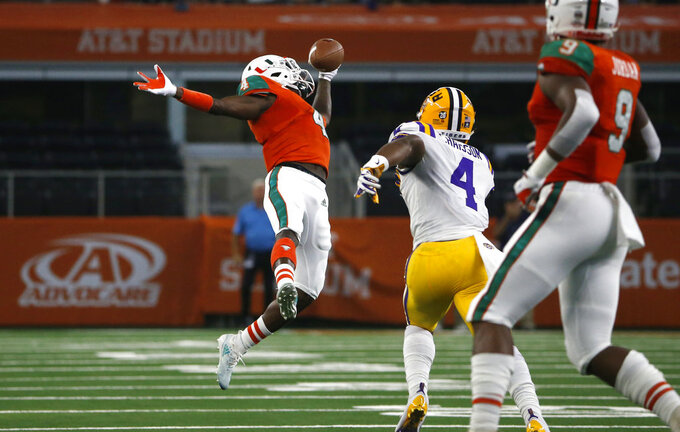 Miami wide receiver Jeff Thomas, left, makes a one-handed catch for a first down in front of LSU linebacker K'Lavon Chaisson, second from right, during the first half of an NCAA college football game Sunday, Sept. 2, 2018, in Arlington, Texas. (AP Photo/Ron Jenkins)

LSU edge pass-rusher K'Lavon Chaisson's season is over after three productive quarters against Miami.
The 11th-ranked Tigers will have to make do without Chaisson because of a knee injury he suffered during a season-opening victory over the Hurricanes, LSU coach Ed Orgeron said Tuesday.
"I feel bad for him," Orgeron said. "He had totally dedicated himself to this year. He will bounce back. His teammates are very sad."
The 6-foot-4, 238-pound Chaisson was a prized 2017 recruit from the Houston area who played often as a freshman and entered his sophomore campaign as the team's premier pass-rushing outside linebacker. He had one sack and was in on five tackles in a 33-17 victory on Sunday night that moved LSU from 25th to 11th in the AP Top 25 poll, while sinking Miami from No. 8 to No. 22.
As a freshman, Chaisson played in 12 games, starting three, and was in on 27 tackles, including two sacks and 4 ½ tackles for loss.
Orgeron declined to provide specific details on the injury, but trainers could be seen looking at Chaisson's left knee after it buckled during a play early in the fourth quarter. A person familiar with the situation, speaking to The Associated Press on condition of anonymity because it wasn't announced, said Chaisson was diagnosed with a torn anterior cruciate ligament. That diagnosis was first reported by Sports Illustrated.
Chaisson took to social media to thank fans for their support.
"Thanks to everyone who sent out thoughts and prayers! It's a tough thing to handle but I'm surely not alone," Chaisson posted on Twitter. "I ask that you keep sending blessings and prayers my way as we trust in the Lord and his plan. See y'all next season!"
LSU hosts Southeastern Louisiana of the second-tier Football Championship Subdivision on Saturday night.
Chaisson's injury could mean more snaps for backup Andre Anthony, who like Chaisson is listed at 6-4, 238 pounds. Ray Thornton, a 6-4, 226-pound redshirt sophomore who played in six games with two starts last season, also is in the mix, as is Travez Moore, a 6-4, 253-pound transfer from Copiah Lincoln Community College. Moore was among the top-rated junior college recruits in the country at his position. Orgeron said even 6-3, 235-pound freshman Jarell Cherry could compete for snaps.
"We have several guys there," Orgeron said. "That is a spot that we have some depth at, and we are going to see this week who is the best guy to put at that position."
Anthony is in his third year at LSU, but the New Orleans native has hardly played. He sat out his freshman year as a redshirt and could not play last season because of a left foot injury. He made one tackle against Miami.
Now Anthony, one of the highest-rated recruits in Louisiana in 2015, could get his chance to fulfil the potential LSU saw in him when they signed him two years ago.
___
AP freelancer Bryan Lazare in Baton Rouge contributed to this report.
___
More AP college football: https://apnews.com/tag/Collegefootball and https://twitter.com/AP_Top25