No. 11 Spartans brace for Addison, No. 13 Pitt in Peach Bowl 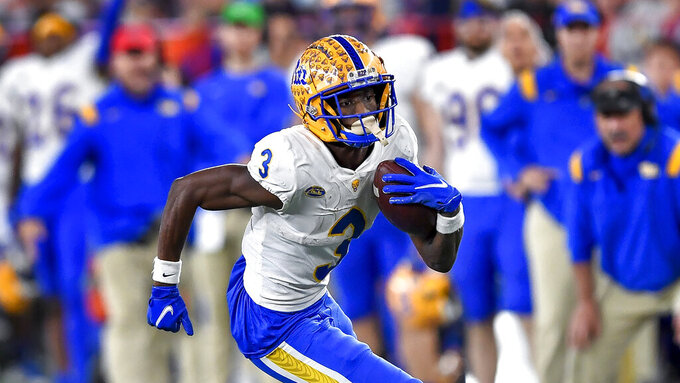 The No. 11 Spartans (10-2) still have to worry about Jordan Addison, the Biletnikoff Award winner as the nation's top wide receiver, when they face No. 13 Pitt (11-2) in Thursday night's Peach Bowl.

“Man, the guy can do it all,” said Michigan State defensive coordinator Scottie Hazelton of Addison, a sophomore who leads the nation with 17 touchdown catches.

“You don’t win the Biletnikoff without being an outstanding player. And he’s a guy, we need to know where he is and where he’s at. Because they’ll put him everywhere. They’ll put him in the back field and out wide and everything in between. So, we’re trying to have some awareness where he is.”

Pickett, who finished third in the Heisman Trophy voting, won't play as he is protecting his NFL draft status. Veteran backup quarterback Nick Patti will make his second career start. It will be his first start since 2019.

The Spartans have allowed 337.7 passing yards per game to rank last among the nation's 130 FBS teams.

Patti has thrown only 14 passes this season as he auditions for the starting job in 2022. Replacing Pickett, expected to be one of the first quarterbacks selected in next year's NFL draft, is a difficult challenge.

Even Pitt coach Pat Narduzzi has had difficulty adjusting to the transition.

“We’ve got a lot of trust in Kenny — excuse me, in Nick, Freudian slip there — in Nick Patti and his ability to throw it,” Narduzzi said Wednesday.

Michigan State also will be missing its best player, running back Kenneth Walker, who chose to skip the game to focus on preparing for the NFL draft.

“It’s hard to replace a guy like Ken,” coach Mel Tucker said. “You really can’t do that, but we have other players obviously on our roster at that position that are going to be next man up. They’re going to step up and get the job done and we have a plan for that. And, I feel really good about our run game.”

Jordon Simmons, who averaged 4.3 yards on 54 carries this season, and Elijah Collins will likely get a shot to share the load from the backfield.

Walker ran for 1,636 yards, second in FBS, and ranked among the nation’s leaders with 19 touchdowns. He was named Walter Camp player of the year and won the Doak Walker Award as the nation’s best running back.

ON THEIR WAY OUT

Michigan State safety Michael Dowell, one of several players to enter the transfer portal, will sit out the game.

“I’m supporting them on the decisions that they do make,” Tucker said. “I just told the guys at the very beginning, at the onset, if you’re in, you’re in 100%, and if you’re not in, let’s communicate that.”

Addison is not the only threat on Pitt's offense. Running backs Israel Abanikanda, Vincent Davis and Rodney Hammond have given the Panthers some needed offensive balance. The emergence of freshman tight end Gavin Bartholomew has bolstered a position that was once a weakness.

“When we’re both out there together, you know, it’s one guy opens the next guy up,” Krull said.

AP Sports Writers Larry Lage and Will Graves contributed to this report.