No. 12 Kentucky tries to avoid 1st losing streak this season 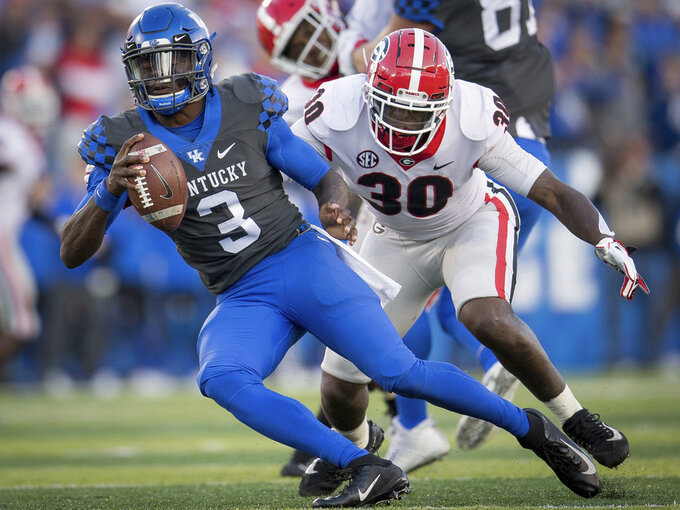 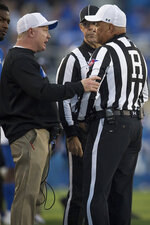 LEXINGTON, Ky. (AP) — No. 12 Kentucky is determined not to let a disappointing loss to No. 5 Georgia derail the rest of its season.

While Kentucky's postgame mood was understandably somber after the loss, the Wildcats also seemed eager to turn the page. Their resolve has coach Mark Stoops encouraged about quickly bouncing back from the setback.

"You have to learn and grow from every opportunity," Stoops said Monday, "and certainly in that game, we have to take some good from that and they will.

"You have to earn the right to get in that position from a lot of hard work, and we've got to continue to do that. I think it's pretty evident that we need to continue to recruit. Those guys (Georgia) are pretty talented."

The Wildcats believe they're skilled as well and want to get back on the winning track.

Having a short memory is a good first step for Kentucky. The Wildcats are still pretty good, though they dropped seven spots to eighth nationally in scoring defense (15.3 points per game) and rank 15th overall in total defense (giving up 311.8 yards per game).

The priority is shoring up the run defense and making things even more difficult for Tennessee's SEC-worst rushing attack (127.7 yards).

"We know where our heads are," senior linebacker Josh Allen said. "We know what we have to do. We've got to learn from our corrections and just move on."

Offensively, the passing game has been a bright spot for Kentucky. Sophomore quarterback Terry Wilson has thrown for 493 yards and two TDs the past two weeks.

The Wildcats need to rejuvenate their strong ground game to complement Wilson's arm. While junior back Benny Snell Jr. rushed for 73 yards to break 1,000 for the third straight season, Kentucky has failed to break 100 yards three times in the past four contests and hasn't scored more than 17 points over that span.

Stoops acknowledged that a season-long heavy workload is taking its toll on Snell, who's nursing a sore ankle. But the coach also said the offensive line needs to improve from inconsistent recent play.

"It's a group effort and it has something to do with the guys on the other side as well," he said.

It will be an uphill battle against the Volunteers. The Wildcats have not fared well in Knoxville. Kentucky hasn't won at Tennessee since 1984.

Stoops won't discuss that frustrating streak with players, following his approach used before his team traveled to Florida in hopes of ending a 31-game slide against the Gators.

The Wildcats knew the situation and finally got the last word with a 27-16 upset that has jump-started their best start in 41 years. Now they want to avoid their first losing streak this season.

"We aren't going to let this loss turn into two," running back A.J. Rose said. "We have a goal and we came short of that goal, but we still want to finish the SEC strong."