No. 13 Auburn hopes for 2017 repeat against Georgia, Alabama 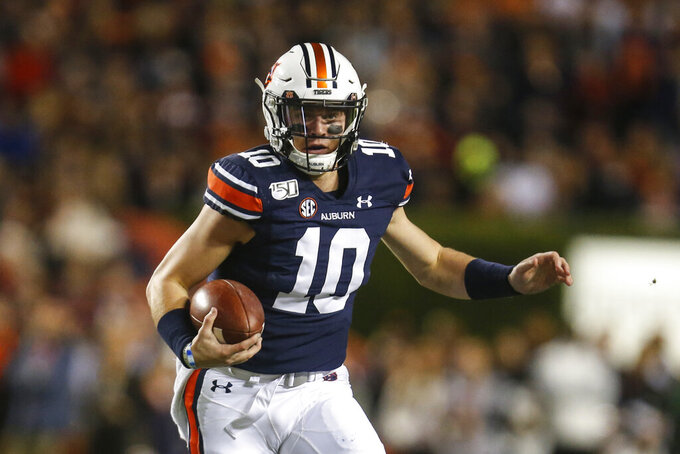 Auburn quarterback Bo Nix (10) carries the ball during the first half of the team's NCAA college football game against Mississippi, Saturday, Nov. 2, 2019, in Auburn, Ala. (AP Photo/Butch Dill)

AUBURN, Ala. (AP) — The Auburn Tigers are used to being judged largely by what happens in their last two Southeastern Conference games of the regular season.

This season will likely be no different.

The 13th-ranked Tigers have a chance to salvage their hopes for a special season — or perhaps be condemned to a disappointing one — over the final three weeks. That’s because Auburn hosts its two chief rivals, No. 5 Georgia on Saturday and No. 4 Alabama on Nov. 30.

Two years ago, the Tigers found their path to redemption and to the Southeastern Conference championship game with wins over the Bulldogs and Crimson Tide, both of whom came in with a No. 1 ranking. Alabama was No. 1 in the AP poll at the time and Georgia was No. 2 but topped the playoff rankings.

“For us to be able to do what we want to do and be able to have a chance at the things we said that we want, then we know that this back stretch is the most important to us,” Auburn defensive tackle Derrick Brown said. “Every single year, playing Georgia and Alabama have always been the high focus points and winning those games on the back end.

“That’s whether you’re an Auburn football player, Auburn fan — I think that’s the most crucial time of the year. I just think that’s one of those things where it will never change.”

Well, the schedule will change, at least. Auburn and Georgia will play in October next season. It’s a move Auburn officials had pushed for, though now they’ll play current No. 1 LSU ahead of Alabama in 2020.

Because of such a tough closing schedule — with an interlude against FCS Samford — the Tigers do have a chance to make a move up from No. 13 in the playoff rankings and into that discussion.

They have played three teams currently ranked among the top 11 in the AP poll.

The situation is similar to 2017. Both teams had to rebound from tough losses to LSU. Two years ago, Auburn fell 27-23 after blowing an early 17-point lead while first-year starting quarterback Jarrett Stidham struggled. This time, Auburn fell 23-20 in Baton Rouge and freshman QB Bo Nix also had a subpar performance.

Auburn went on to beat Georgia and Alabama in 2017 before losing to the Bulldogs in the SEC championship game with a likely playoff berth on the line for the Tigers.

The Bulldogs and Crimson Tide went on to play for a national title. Auburn is almost certainly out of the running for Atlanta but has a chance to change how this season is perceived by fans and not just to try to play the spoiler.

“We have a lot to play for here. That’s what we’re worried about,” Auburn coach Gus Malzahn said. “We’re not worried about them. We’re worried about us. If things turn out good like they did a couple of years ago we’ve got some really good things ahead of us. That’s the way we’re looking at it.”

“It was very rough,” Rice said. “We didn’t take care of business that day, so we lost. This time, we’re going in with a different mindset. We know what we’re supposed to do and how to execute it.”