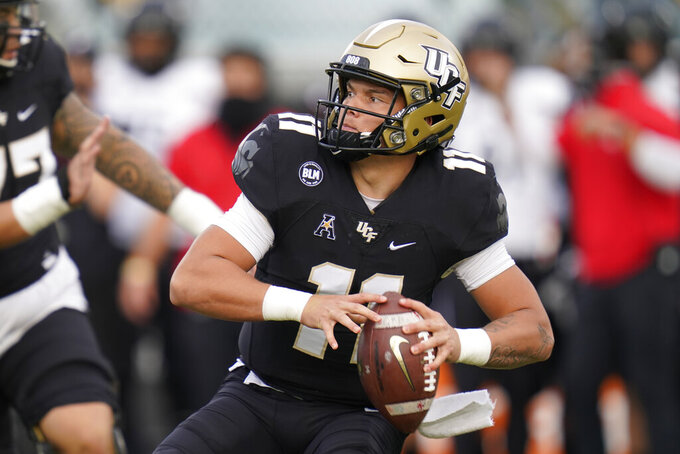 Central Florida quarterback Dillon Gabriel looks for a receiver during the first half of an NCAA college football game against Cincinnati, Saturday, Nov. 21, 2020, in Orlando, Fla. (AP Photo/John Raoux)

Preparing for the Boca Raton Bowl proved a bit of a slippery slope for the Central Florida Knights.

For a day, anyway, when coach Josh Heupel imported a little snow for some impromptu sledding in the Florida sun.

All part of Heupel’s plan to bring a dose of fun to the bowl game with some of the customary pageantry halted because of the COVID-19 pandemic. The Knights also played dodgeball and held a movie night inside the basketball arena, where they screened “The Longest Yard” on the giant scoreboard.

Next item on the fun list: Play No. 13 BYU on Tuesday at FAU Stadium in Boca Raton, Florida.

“A really good football team,” Heupel said. “Look at what they do on offense and defensively. I think they’re the only team in the country ranked in the top-10 on both sides of the football."

“We’re going to have to match their scoring output,” BYU coach Kalani Sitake said. “It will be a great matchup for us.”

The last time the Cougars took the field was in a 28-14 win over San Diego State on Dec. 12 at LaVell Edwards Stadium in freezing conditions.

“Kind of reminds me of why you don’t play football in Provo in December,” Sitake joked. “Had a lot of frozen toes. Probably should’ve doubled up on my socks.”

They’re ready to bask in the warmth of Boca Raton, where the temperature at kickoff is expected to be about 69 degrees.

But the Sunshine State hasn’t exactly given the Cougars a warm reception. They're 0-3 in Florida bowl games, including losses in the 1976 Tangerine Bowl, 1985 Florida Citrus Bowl and 2014 Miami Beach Bowl.

“Thanks for the reminder,” Sitake cracked. “It’s a good time to go do some new things.”

That’s why Heupel added some fun and games to practice time, including the snow to sled on and to build tiny snowmen.

“For a good portion of our football team, they’ve actually never seen snow. Just having an experience like that, sledding downhill, getting pelted with some snowballs by teammates, too," recounted Heupel, who’s 28-7 in three seasons with UCF. “Just trying to do some things that are different."

Make no mistake, though, this is not QB vs. QB.

“It’s BYU against UCF,” Wilson said. “He’s a great player, don’t get me wrong, but I’m going to approach it like very single game this year.”

This will be the third time these two programs have met on the field. The last time the Knights and Cougars played was in Orlando, Florida, on Oct. 9, 2014, when the Knights won 31-24 in overtime.

“Both of these teams have large and very engaged fan bases,” RoofClaim.com Boca Raton Bowl executive director Doug Mosley said in a statement. “There’s just not enough available seats for everyone who wants to attend this game.”

The Knights have forced 22 turnovers this season, with nine interceptions and 13 fumble recoveries. The team is 6-0 when winning the turnover margin and 0-3 when equal in turnovers.

The Cougars were looking at a possible New Year’s Six bowl game before coming up a yard short in a 22-17 loss at No. 9 Coastal Carolina on Dec. 5. Asked if there was a play he’d like to have back from this season, Wilson said it wasn’t a play so much as that game.

“I want to play Coastal Carolina again. I think that would be one the whole team would want back,” Wilson said. “We didn’t come ready to play. We didn’t do what we were supposed to do."

Now, they're focused on UCF.

“We're super excited to play this game,” Wilson said. “It's going to be warm — that’s the coolest part.”