No. 13 North Carolina can clinch 10-win season vs Ga Tech 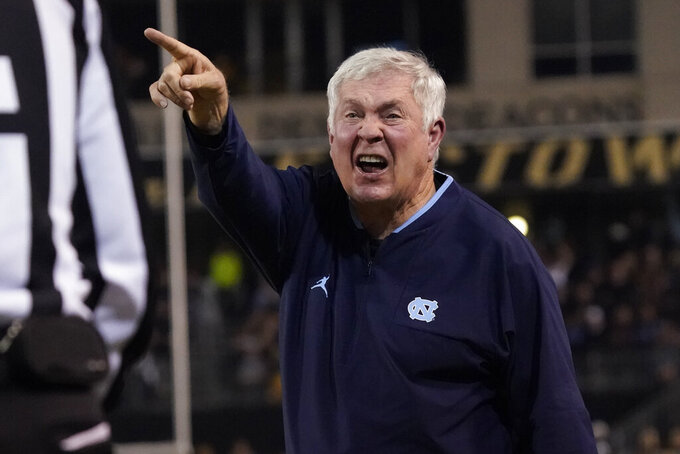 CHAPEL HILL, N.C. (AP) — Coach Mack Brown had been clear he didn’t want to talk about various scenarios for his North Carolina team to clinch its Atlantic Coast Conference division title, only winning.

The 13th-ranked Tar Heels have done that and secured a spot in the league championship game. That sets up a new challenge entering Saturday’s home game against Georgia Tech: Focus on the task at hand with so much ahead.

“Everybody will be bragging on our guys, everybody talking about clinching the ACC Coastal (Division), getting ready to go to the championship game, asking about tickets,” Brown said. “Then you’ve got your rival (North Carolina State) next week on Senior Day. And this one’s sitting in here where we better get ready to play.”

The Tar Heels (9-1, 6-0 ACC) clinched the division race with last weekend’s win at Wake Forest, capping the first 6-0 season road record in program history. Now they’re back home for the final two games, the first coming against the Yellow Jackets (4-6, 3-4) before hosting the Wolfpack as they try to reach 10 wins for the first time since 2015.

Brown can also point to the Tar Heels’ lopsided loss at Georgia Tech last year to remind his team of what can happen if they’re not focused on this weekend.

“There won’t be much talk about this game publicly as there will be with the State game and the championship game,” Brown said. “So we have to get our minds ready to go because anybody that watches that film last year — they’ve got good enough players and they absolutely whipped us in every way and outcoached us.”

After rallying from a 27-16 fourth-quarter deficit to win two weeks ago at Virginia Tech, Georgia Tech has had little go right. Its top two quarterbacks are done for the season with injuries following last week’s lopsided loss to Miami, but interim coach Brent Key likes how his team has responded in practice.

Second-year UNC passer Drake Maye has been brilliant from the start of the season. It’s now causing a growing buzz about Maye’s potential as a Heisman Trophy candidate, with the program’s official Twitter account posting about it Sunday.

Maye is tied for first in the Bowl Subdivision in touchdown passes (34) with Ohio State’s C.J. Stroud and No. 1 in total offense (399.6) while ranking second in passing offense (341.2).

While Maye is rolling, top receiver Josh Downs is on quite a run, too.

Downs is coming off an 11-catch, 154-yard day at Wake Forest that included three first-half touchdowns — with Downs taking time to emphatically count off all three on his fingers after the third scoring grab.

Georgia Tech lost its top two quarterbacks in the span of a few days. Jeff Sims, the Yellow Jackets’ starter since 2020, is out indefinitely undergoing medical treatment for an injured foot. Zach Pyron broke his collarbone in the third quarter of last week’s 35-14 home loss to Miami and is out for the rest of the season.

Queue up Zach Gibson, a transfer from Akron who will make his second start since completing two of three passes playing the first series of a 41-16 loss at Florida State three weeks ago. Gibson’s backup will be Taisun Phommachanh, a Clemson transfer who has yet to take a snap this year.

North Carolina’s defense has been among the nation’s worst statistically all season but has shown a knack for coming up with key plays at the right time, too.

The Tar Heels rank 124th in FBS in total defense (460.9) and 109th in scoring defense (31.3), though the latter is much better (25.8) in ACC play. And in last weekend’s win against Wake Forest and star quarterback Sam Hartman, the defense came up with a fourth-down stop inside its own 10-yard line, a critical interception near midfield to set up the go-ahead field goal and another fourth-down stop in the fourth quarter.

“It’s been a pretty opportunistic defense,” said Gene Chizik, who is in the first year of his second stint overseeing UNC’s defense. “The fourth quarter, we didn’t give up a point. Somehow or another, we were able to close out three straight drives. It wasn’t always pretty, but we’re looking for results.”

Barring a spectacular crash by both North Carolina and No. 1 Georgia, the Jackets will miss out on a bowl game for the fourth straight year. Key has somewhat stabilized the program with a 3-3 record since Geoff Collins was fired with the worst winning percentage in program history, but considering that he’s likely to finish 3-5, that mark might not be enough to persuade new athletic director J Batt to bring him on full-time.