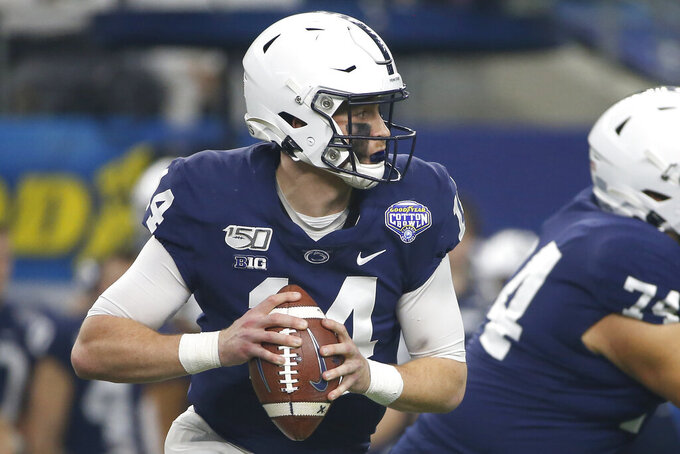 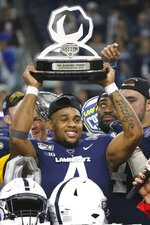 ARLINGTON, Texas (AP) — All-America linebacker Micah Parsons led the big blitz for Penn State, and he had Brady White all wrapped up when the Memphis quarterback suddenly flipped away the ball — right into the hands of Garrett Taylor.

On a day when the Nittany Lions' defense gave up its most points and yards all season, Taylor turned that gift into a 15-yard interception return for a touchdown in a 53-39 victory over the Group of Five Tigers on Saturday in the highest-scoring Cotton Bowl ever.

Journey Brown ran for 202 yards with two long touchdowns, but the Parsons-created pick-six came three plays after Brown was stopped short on a fourth-and-1. Taylor put the No. 13 Nittany Lions (11-2, No. 10 CFP) up 45-36 going into the fourth quarter of the 84th Cotton Bowl.

“For our defense to come back and what you probably consider a sudden-change situation, and be able to get that play, I think it was a huge momentum play," coach James Franklin said.

Said Parsons: “The game was going back and forth, and I thought the team who had a defensive turnover would win, and we got one when we needed."

Brown was the offensive MVP and Parsons, with 14 tackles and two sacks, was the game's top defensive player. Both had gone back and forth about that possibility during practice this week.

“We go against him all the time ... nobody prepares and prepares for those opportunities and those moments more than this guy does,” Brown said of Parsons, who was sitting right by him.

“It just didn't end the way we wanted to,” Silverfield said. “I have to do a better job as a head coach to make sure all three phases are prepared. That's 100% on me. That won't happen moving forward.”

White was 32-of-51 passing for 454 yards with two interceptions. He had a rushing touchdown, as did Patrick Taylor Jr. and Kenneth Gainwell. The rest of the Tigers' points came on a Cotton Bowl-record six field goals by Riley Patterson, including a record-long 51-yarder.

“I don't care about performances ... but I care about wins,” White said. “I want championships, I want wins.”

The Tigers, who set a school record for victories while winning their first outright conference title since 1969, finished with 542 total yards. But White was sacked a season-high six times and didn't throw a touchdown for the first time since the season opener.

Freshman running back Noah Cain added 92 yards and two touchdowns rushing for Penn State, which won for the 30th time in its 50 bowl appearances.

The Nittany Lions had 529 total yards. Brown got his 202 rushing yards on 16 carries, including a tackle-shredding 32-yard touchdown early and a 56-yard score when he went up the middle virtually untouched.

Memphis: The Tigers wrapped up the most successful four-year stretch in school history with 38 victories, but this senior class never won a bowl game. Memphis has been to a bowl in each of the past six seasons, a school record, but has lost its last five bowl games.

Penn State: The Nittany Lions had allowed only 14.1 points per game in the regular season, and the most yards allowed had been 462. Penn State played in its third New Year's Six game in four years and finished with 11 wins for the third time in that span.

The announced attendance of 54,828 was the lowest for the Cotton Bowl since New Year's Day 1948. This was the 11th Cotton Bowl at AT&T Stadium, and the lowest previous attendance in the home of the NFL's Dallas Cowboys had been 59,615 three seasons ago when Western Michigan, another Group of Five team, played Wisconsin. ... The eight combined rushing touchdowns were the most for a New Year's Six game. ... Patterson's six field goals were also a NY6 record. ... Big Ten teams are 5-1 in the Cotton Bowl. ... Group of Five teams are 3-3 in New Year's Six games.

Memphis awaits a final decision from White, a 23-year-old former graduate transfer, on whether he will return for his final season of eligibility next year. The Tigers played the Cotton Bowl without two of their seniors — tight end Joey Magnifico (knee) and left tackle Scott Dill (left team). Gainwell finished his redshirt freshman season with 1,459 yards and 13 touchdowns rushing. Silverfield's first regular-season game as coach comes Sept. 5 at home in the season opener against Arkansas State.

Penn State could return all of its starting offensive skill players, including quarterback Sean Clifford and Brown, since none was a senior this season. Parsons was a sophomore. Franklin, who finished his sixth season with the Nittany Lions, has a new contract through 2022. Penn State's 2020 opener is Sept. 5 at home against Kent State.