No. 14 Michigan State aiming for consistency against Akron 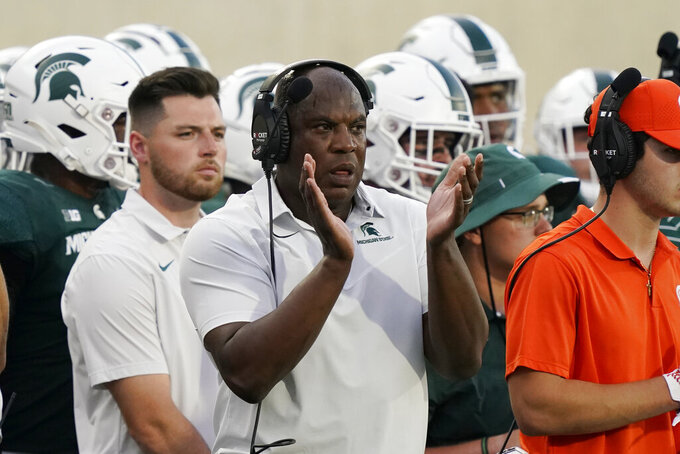 Michigan State coach Mel Tucker is challenging his players to raise their level of intensity Saturday when the 14th-ranked Spartans host Akron.

The third-year Spartans coach was not pleased with his team’s effort Friday night in a season-opening 35-13 victory over Western Michigan.

“We’re just challenging everyone in the organization to get uncomfortable and attack this week and we need to get to the next level of our intensity,” Tucker said. “We need to prepare to play 60 minutes this week – not 10 or 20 or play in spurts. We just have to raise our level of intensity of what we’re doing. We have to attack everything that we’re doing.”

The Spartans are heavily favored. Akron struggled in Joe Moorhead’s debut as Zips head coach, with the Mid-American Conference team needing overtime to beat St. Francis (Pa.) 30-23 in its opener.

“We’re super motivated,” said Tucker whose team has won seven straight home games. “We have a lot to prove in terms of how we play on the field.”

Michigan State will have to do so without two key defensive players who were injured against Western Michigan. Linebacker Darius Snow was lost for the season after suffering an injury to his right leg and safety Xavier Henderson is expected to miss significant time with a leg injury.

Moorhead remembers well the last time he coached against Michigan State in Spartan Stadium in 2017.

“Unfortunately, the last time we were there we lost 27-24 on a field goal as time expired,” recalled Moorhead, who was Penn State’s offensive coordinator at that time. “The game was delayed three hours prior to halftime because of a lightning storm.”

After giving up 453 yards to FCS school St. Francis, Moorhead said his defense faces a significant challenge against Michigan State’s offense, which generated 430 yards vs. the Broncos.

“They do a great job at mixing play action passes off their most effective runs,” he said. “So our (defensive backs) have to have great eye discipline when we’re in zone (defense). When we are in man to man, whether it’s off or press, we’ve got to do a great job because the receivers all have good size and play the ball well in the air.”

Earlier in the week, Tucker labeled Michigan State quarterback Payton Thorne a “perfectionist.” He was not the first person to do that.

“I remember I had an art teacher in sixth grade, I still remember this somehow, she called me that,” Thorne recalled. “She said, ‘You’re a perfectionist. You need to not be so detailed.’ But I was like, ‘Well, that’s just how I am, that’s how I’m wired, I guess.’

“My dad always told me strive for perfection and settle for excellence. And so that’s kind of what I live by.”

Moorhead said he is quite familiar with Thorne, whom he recruited while at Penn State.

“He does a great job operating the system,” Moorhead said. “He can beat you with his arms and his legs.”

The game will be the first meeting between the schools since 1914. Michigan State, which was known then as Michigan Agricultural College, beat Akron 41-0 in 1913 in East Lansing and also won the next season at home, 75-6. George E. “Carp” Julian scored a school-record seven touchdowns in the 1914 victory.

Akron has two Michigan State transfers in redshirt junior linebacker Jeslord Boateng and sophomore running back Anthony Williams Jr., who both transferred to Akron after the 2020 season. The Spartans might also recognize former Pittsburgh wide receiver Shocky Jacques-Louis who played against Michigan State in the 2022 Peach Bowl and is now a graduate transfer with the Zips.