No. 14 Michigan State aims for consistency against Akron 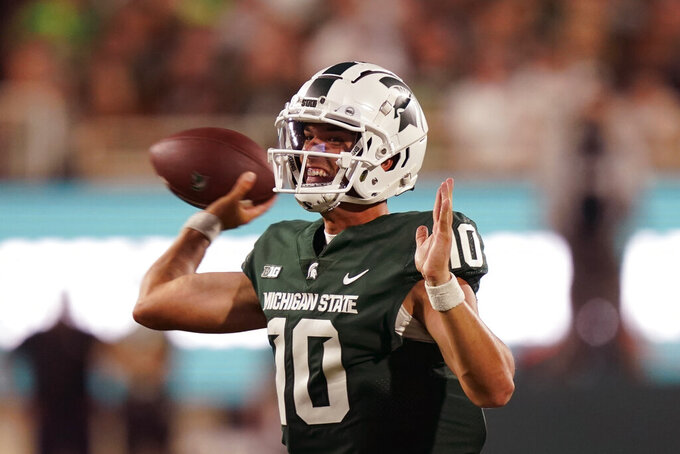 Line: Michigan State by 34 1/2 according to FanDuel Sportsbook.

Michigan State is hoping to improve to 2-0 this season against Mid-American Conference schools before its big showdown at Washington. Akron is looking to start out 2-0 for the first time since 2018, which is also the last time it beat a Power Five team at Northwestern.

The Zips’ offensive line against vs. the Spartans’ defensive front. Michigan State started the season with seven sacks against Western Michigan while Akron gave up six in its season opener vs. St. Francis.

Akron: WR Shocky Jacques-Louis. The graduate transfer from Pittsburgh had nine catches for 122 yards and a touchdown in the season opener.

Michigan State’s Jacoby Windmon was named the Walter Camp Football Foundation defensive player of the week after registering seven tackles, four sacks and a forced fumble vs. Western Michigan. … Akron has a 1-30 record vs. ranked teams with its lone win coming against Marshall in 2002. … The two schools last met in 1914 which ended in a 75-6 win for Michigan State — known then as Michigan Agricultural College. … Michigan State has won 14 straight regular-season games against Mid-American Conference teams. … Akron has two Michigan State transfers in redshirt junior linebacker Jeslord Boateng and sophomore running back Anthony Williams Jr., who both transferred to Akron after the 2020 season.