No. 14 Penn State looks for another win over Maryland 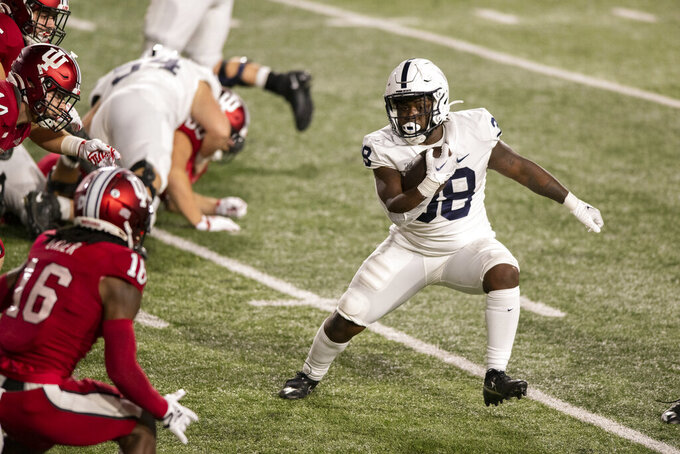 Penn State running back Tank Smith (38) runs the ball into the Indiana defense during the second half of an NCAA college football game, Saturday, Nov. 5, 2022, in Bloomington, Ind. (AP Photo/Doug McSchooler)

STATE COLLEGE, Pa. (AP) — Maryland coach Mike Locksley reminded his players this week that their annual trip to Penn State is not a rivalry game. It’s been too one-sided to look at it that way.

“Obviously, we have to compete a little better to get it to that point,” Locksley said. “It’s an opportunity for us to see where we line up and see how we have progressed when it comes to the Big Ten. I’ve got a lot of confidence we’ll show up.”

No. 14 Penn State (7-2, 4–2 Big Ten and 14th in the College Football Playoff rankings) will try to win its 42nd of 46 total games in the series when the two meet at Beaver Stadium on Saturday. The Nittany Lions have won six of eight since Maryland (6-3, 3-3) joined the Big Ten in 2014 — and Penn State has scored 44 points per game in those wins.

Penn State wants to continue that trend, especially since it hasn’t yet achieved what coach James Franklin would call a “signature win.” After losing to Michigan and Ohio State, the Nittany Lions also lost out on a chance to compete for a Big Ten title.

Franklin said he knows a win over Maryland won't move the needle much for a restless fanbase. But if Penn State can keep winning, a sunny bowl destination against a marquee foe should await.

“Hopefully at the end of the season we’re where we need to be and put ourselves in the best position possibly for the bowl season as well as momentum going into next season,” Franklin said.

A similar path exists for the Terps, who started 6-2 and are looking to avoid fading down the stretch like last season, when they started 5-3 but finished 6-6.

“Our past doesn’t dictate our future,” Locksley said. “It’s pretty much what we do now.”

Penn State will likely be without standout left tackle Olu Fashanu, who suffered an unspecified injury against Ohio State. The Nittany Lions may also be thin at linebacker where Curtis Jacobs and Tyler Elsdon have been yielding snaps to reserves.

Kobe King played his most reps in the middle of Penn State’s defense last week in the win over Indiana, allowing just 196 total yards.

“He’s making a few more splash plays every single week ... the staff is really excited about him and his future," Franklin said.

The Terps are hoping top receiver Rakim Jarrett can play a week after he suffered a lower leg injury against Wisconsin. Locksley said there was no structural damage.

“If I’m a betting man, I know Rakim Jarrett wants to play in this game,” Locksley said. “And I would think that he will be available, but we got to get through this week and see.”

Penn State’s defensive line is coming off its best game of the season with six sacks against Indiana and a program-record 16 tackles for loss.

The team’s front-line defenders know they’ll need to keep it up to contain one of the league’s best passers.

Maryland quarterback Taulia Tagovailoa is completing 70% of his passes and has thrown for 2,078 yards and 14 touchdowns this season. He’s accurate outside the pocket and the Terps will need him to keep extending plays to create coverage holes in Penn State’s talented secondary.

“It’s almost like a domino effect,” Penn State defensive end Adisa Isaac said. “Anytime one of our brothers makes a play, that just fuels the rest of us to go get it.”

Wisconsin tortured Maryland on the edge last week with jet sweeps and stretch runs for big gains or scores.

The Nittany Lions have two talented running backs they deploy equally. Nick Singleton and Kaytron Allen have both tied Penn State’s record for touchdowns by a freshman. They both have eight scores and both have ripped off big runs all season. Singleton has seven runs for 20 or more yards.

Despite the one-sided series, Maryland’s two wins against Penn State since joining the Big Ten have come at Beaver Stadium.

The Terps won 20-19 in the infamous “handshake” game — when Maryland players refused to shake their counterparts' hands after the coin toss. Maryland won 35-19 in 2020, when the stadium was empty because of the pandemic.