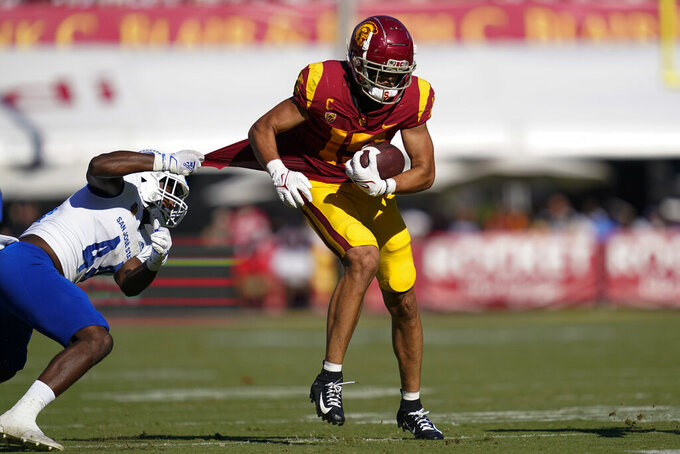 The Cardinal and Trojans open the Pac-12 schedule by resuming their longstanding rivalry after not playing during last season’s pandemic-shortened campaign. USC got a flattering 30-7 win over San Jose State thanks to a tenacious defense. But with one touchdown scored in four red-zone visits, the offense will need to show significant improvement for them to contend for the conference title. After being manhandled 24-7 by Kansas State, Stanford needs a victory to keep its season from unraveling.

Stanford QB Tanner McKee against USC’s defense. McKee was named the Cardinal’s starting quarterback after completing 15 of 18 passes for 118 yards and a touchdown against the Wildcats while splitting time with Jack West. The 6-foot-6, 225-pound sophomore was part of the same 2018 recruiting class as first overall draft pick Trevor Lawrence, but McKee’s first college start comes against a talented bunch of Trojans. They allowed Spartans veteran signal-caller Nick Starkel to complete just 52.2% of his passes and picked him off twice, including nickelback Greg Johnson’s 37-yard interception return for a touchdown that sealed the win.

Stanford: WR Brycen Tremayne was the main target of the new-look passing game, finishing with five receptions for 62 yards and a touchdown. McKee found Tremayne three times on the Cardinal’s lone scoring drive, and the big-bodied senior will have to be effective against physical cornerbacks Chris Steele and Isaac Taylor-Stuart to keep the offense moving.

USC: WR Tahj Washington had four catches for 56 yards and a touchdown in his debut for the Trojans after earning freshman All-America honors at Memphis last season. With Stanford’s defense likely to focus on Drake London after shredding the Spartans for 137 yards on 12 grabs, USC has to get more from its secondary receivers going forward.

USC QB Kedon Slovis made his first career start against Stanford in 2019. He was 28 of 33 for 377 yards and three touchdowns, leading the Trojans to a 45-20 win. … Stanford coach David Shaw has won 62 Pac-12 games, tied with USC’s Pete Carroll for ninth in conference history. … London ranks third in the FBS in receptions and ninth in yards receiving per game. … Stanford DE Tucker Fisk had two tackles with a sack in his first game playing defense. Fisk was a tight end in his first four seasons with the Cardinal and played nine snaps on offense against Kansas State.