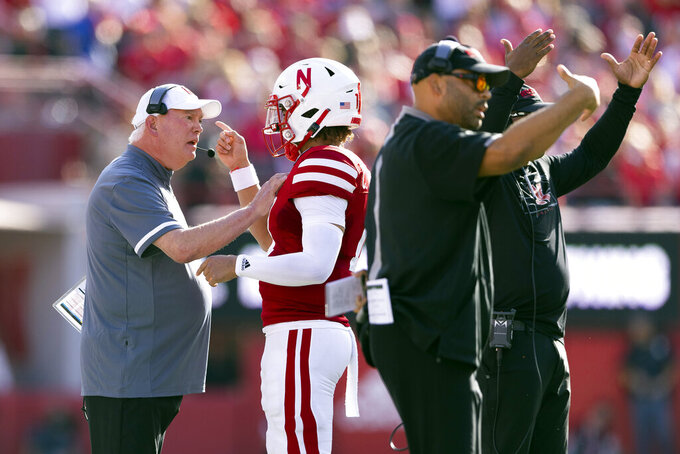 Nebraska offensive coordinator and quarterbacks coach Mark Whipple, left, chats with quarterback Casey Thompson after he threw an interception against Illinois during the first half of an NCAA college football game Saturday, Oct. 29, 2022, in Lincoln, Neb. (AP Photo/Rebecca S. Gratz)

The Illini's 26-9 win over Nebraska on Saturday was nothing flashy, just workmanlike. Chase Brown and the top defense in the country did what they've been doing all year, and now No. 17 Illinois is on a six-game win streak for the first time since 2011.

“Our guys are locked into the moment,” second-year coach Bret Bielema said. “When you get better and better, everyone wants to talk about where you’re going to end up. What we need to concentrate on is the journey, and to get to where we are today has been probably one of the most enjoyable journeys I’ve ever been on in my life.”

Brown rushed for 149 yards and scored on consecutive series in the second quarter to help the Big Ten West-leading Illini (7-1, 4-1) beat the Cornhuskers for the third year in a row and secure their first winning regular-season record since 2007.

“I tell these guys all the time that I’ve been around some championship teams, and this team is that same caliber if not better,” Bielema said. “We're an exceptional defense and we have playmakers on literally both sides of the ball and in the kicking game.”

Nebraska (3-5, 2-3) committed four turnovers and dropped its 20th straight against a Top 25 opponent.

Illinois' Tommy DeVito was 20 of 22 for 179 yards and two touchdowns. His 91% completion rate was a Memorial Stadium record for visiting quarterbacks with at least 20 attempts.

The Illini held Nebraska to 29 yards on 20 plays in the second half and 248 for the game, the fewest by the Huskers since they finished with the same number against Michigan State in 2018. Trey Palmer, coming off a school-record 237-yard receiving performance against Purdue, caught one pass for 1 yard.

“Our guys took away some of their better players," Bielema said, "and obviously when their quarterback went out that made a big difference.”

Brown, the national rushing leader, extended his school-record streak of games with at least 100 yards to nine.

He scored on a 1-yard run and a 12-yard reception in the second quarter to put Illinois up 20-9 at half.

The Huskers then went three-and-out, and DeVito finished an 11-play, 72-yard drive with his pass to Chase Brown with 23 seconds left in the half.

Brown also made a key downfield block to give Isaiah Williams a clear path to the end zone on a 46-yard catch-and-run on Illinois' opening possession.

Williams’ unforced error in the second half put Nebraska in position to cut into the lead. Williams caught a pass in open field and, untouched, dropped the ball at his 23 for the Illini’s first lost fumble in five games.

The Huskers gave the ball right back when Sydney Brown picked off his second pass on Purdy’s ill-advised throw into the middle of the field, and they never advanced past their own 26 on their final four possessions.

“We came out with a great game plan and didn’t execute,” tight end Travis Vokolek said, “so I give all props to Illinois’ defense. Great team. Tough-nosed football team.”

Illinois: The Illini beat a West opponent for the fifth straight time. Brown, who came in with a nation-high 27.4 carries per game, ran 32 times and the Illini had a 16-minute advantage in time of possession.

Nebraska: Everything changed for the Huskers when Thompson went out in the second quarter. The Huskers gained just 34 yards the rest of the game.

Illinois missed out on three points, calling timeout just before Caleb Griffin split the uprights with what would have been a 52-yard field goal. When the Illini lined up for the second try, they were called for a false start and forced to punt.

The Illini will be in line for a promotion after three teams ahead of them in the Top 25 lost. They haven't been in the top 15 since 2007.

Illinois: Hosts Michigan State for the teams' first meeting since 2019.

Nebraska: Hosts Minnesota looking to beat the Gophers for the first time in four years.