No. 21 Texas A&M tries to avoid 'Bama hangover at Mizzou 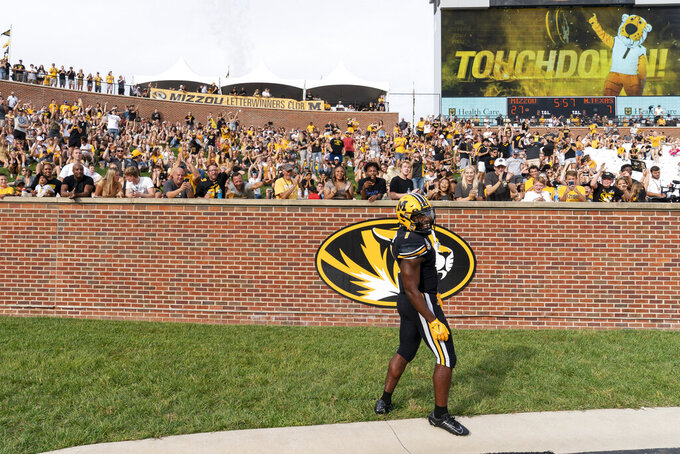 Missouri running back Tyler Badie celebrates his touchdown in front of the end zone crowd during the second quarter of an NCAA college football game against North Texas, Saturday, Oct. 9, 2021, in Columbia, Mo. (AP Photo/L.G. Patterson) 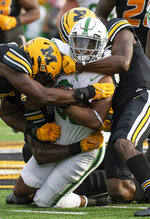 Jimbo Fisher opened his weekly news conference going through everything that Texas A&M did well the previous week, when the Aggies stunned then-No. 1 Alabama before a raucous crowd at Kyle Field.

So it wasn't surprising that by the end of it, Fisher said simply: “I'm tired of talking about it.”

“It's over,” Fisher said. “Understand why we had success. Now, these are the things we've learned. They're wasted lessons unless we carry them on to this week. Missouri is a very tough place to play.”

Indeed, the No. 21 Aggies (4-2, 2-1 SEC) have the always-challenging task of hitting the road following a big win when they visit the Tigers on Saturday. And it probably won't help that kickoff is scheduled for 11 a.m. Central, which means a hangover from last week had better not linger into this coming weekend.

“They're going to be right there, ready for us, waiting to knock us off,” Fisher said. “This is a trap game. You listen to all this stuff all week and you live in the past. That's over with, man. That's over with. Yesterday. Today is all Missouri.”

They've struggled through the first six weeks of the season, their defense giving up so much yardage in a loss to Tennessee that it prompted a change in Eli Drinkwitz's line coach. Things were only marginally better last week, though, when Mizzou briefly dipped out of SEC to play North Texas in a game that should have provided a chance to iron out some problems.

The defense scored on a pick-six, but the Tigers still needed a huge game from running back Tyler Badie in a shootout win.

“They were five of 15 on third down. They had three turnovers,” Drinkwitz said. “There were a lot of improvements. We had how many negative-yardage plays, how many sacks? So those are all steps. It wasn’t perfect, but we didn’t think we were going to transform to the ’85 Bears overnight. We’re working towards it. I thought we took a big step in the process."

The Tigers could take a giant leap in the process on Saturday.

Despite being old Big 12 rivals and still conference foes after realignment, this is the first meeting between Texas A&M and Missouri since Nov. 15, 2014. The Tigers have won two straight and five of the last six in the series, with the Aggies’ last win coming on Nov. 11, 2012 — long before both coaches arrived at their schools.

Badie needed just 17 carries for a career-high 217 yards and two TDs against the Mean Green. It was his second 200-yard game this season, joining Brock Olivo in 1995 and Devin West in 1998 as the only other Tigers to accomplish the feat.

“I’ve always had very high belief in myself,” Badie said. “Like, you have to wait, and your time will come, and luckily for me, that happened this season.”

Texas A&M running back Isaiah Spiller pounded away 17 times and gained just 46 yards against the Crimson Tide, but he managed to keep their defense honest. He should have more running room against Missouri, which has the worst run defense in Division I football.

Tigers freshman Mookie Cooper has been dealing with a foot injury all season, and his frustration reached a breaking point when he complained about his usage following Missouri's loss to Boston College. The Tigers got him more involved last week, when the wide receiver caught four passes and had a touchdown on a jet sweep called back by a penalty.

The Aggies struggled defensively in a 26-22 loss to Mississippi State the previous week, but they came through when it mattered the most against the Crimson Tide. They only allowed 23 points on six trips by Alabama inside the 10-yard line, and they prevented coach Nick Saban’s squad from big plays that lead to easy touchdowns.

“Just a wake up call, you know?” Texas A&M linebacker Edgerrin Cooper said. “We have to turn this thing around and get it going. I feel like the win last week, it’s a great momentum point for us to get everything going.”