No. 22 NC State hopes for clear path to ACC title game at BC 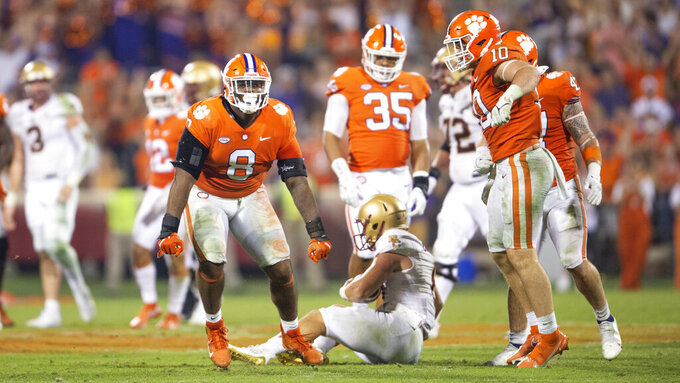 BOSTON (AP) — Boston College coach Jeff Hafley was too busy to watch the Boston Marathon when the race ran past the Chestnut Hill campus Monday. He is hoping to make up for the lack of excitement when the Eagles play No. 22 North Carolina State on Saturday night.

“It will be our first night game with people,” said Hafley, whose first season at BC (4-1, 0-1 Atlantic Coast Conference) was during the pandemic.

“We had a couple of cool night games last year with the cardboard fans,” he said, issuing a plea for the students to be in their seats when the game starts. “To the students: Tailgate all day if you want, but please be sitting down when we run out of that tunnel. That would mean a lot to our players.”

Although it’s been a while since there was much enthusiasm for BC football, Hafley got a taste of it when the fans stormed the field after the Eagles beat Missouri in overtime on Sept. 25 — the first time they’ve won their first four games since Matt Ryan led them to eight straight wins to start the 2007 season.

A 19-13 loss to preseason No. 3 Clemson the next game ended the winning streak. So Hafley went back to work over the off week to prepare for N.C. State (4-1, 1-0), holing up in his office and skipping the festivities of the first fall race in the Boston Marathon’s 125-year history.

“I looked out my office window and it looked like Mardi Gras,” the BC coach said. “In the spring, I’ll get to experience it. But (Monday’s) a busy day.”

Here are some other things to look for in Saturday night’s game:

N.C. State can claim the Atlantic Division title if it wins out, thanks to its double-overtime win over six-time reigning league champion Clemson on Sept. 25.

So far, that’s been the Wolfpack’s only league game in a 4-1 start. And Dave Doeren’s team completed the tricky task of following that emotional win by beating Louisiana Tech the week after the Clemson win before entering last weekend’s open date. The trip to Boston College starts a stretch with four of five on the road, all in the league.

“It does matter that four of the next five on the road, but what matters more is we just take this week for what it is,” Doeren said. “Let’s be the best we can be this week. We’ll worry about next week next week – and keep approaching it that way.”

Quarterback Devin Leary has been sharp since the Mississippi State loss in Week 2.

Leary has thrown nine touchdowns with no interceptions in the past three games since throwing an interception in the 24-10 road loss to the Bulldogs. That includes completing 70.6% of his passes in those games.

“I think as an offense as a whole, we’re executing a lot better,” he said. “I think that really goes into preparation. I think we learned from our mistakes against Mississippi State and we really hit the film room hard.”

BC has been relying on former walk-on Dennis Grosel, who took over after an injury to Notre Dame transfer Phil Jurkovec in Week 2. Grosel has thrown for 763 yards and four touchdowns, but also has four interceptions while guiding the Eagles to a 1-1 record against Power 5 opponents.

“We got through a tough stretch. Felt like we could have gotten them both; we didn’t,” Hafley said. “I just feel like we’re getting better. I feel like we’re closing the gap with some teams.”

N.C. State enters this game leading the ACC in total defense (295.4 yards per game) and rushing defense (92.0), while ranking second in scoring defense (15.8 points allowed per game). That unit will face a test against the Eagles, who have the league’s No. 3 scoring attack (35.6) and leans on a productive run game behind Pat Garwo.

“They definitely want to focus on running the ball first,” Wolfpack linebacker Drake Thomas said, “and that’s something myself and the defense takes pride in.”’

Christopher Dunn has been an advantage for the Wolfpack in the way he can finish stalled drives as a reliable kicker in his three-plus seasons. He’s also shown he can bounce back from stumbles.

The junior owns the program’s career record for field goals with 61, but he missed three against Clemson — including a 39-yarder to end regulation for the win.

Dunn responded by making 36- and 29-yard field goals against Louisiana Tech and improved to 142 for 142 on PATs for his career. Dunn is eight points away from becoming the program’s career scoring leader.